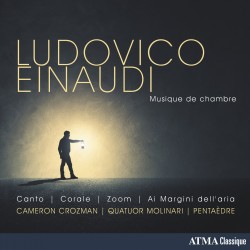 Considered by many to be the world’s most popular classical composer, Italian Ludovico Einaudi’s vast collection of compositions has appeared in films, television series and on countless albums recorded by soloists, ensembles and the composer himself. Musique de chambre features four of Einaudi’s extended works, written for both soloists and chamber ensemble, performed by prominent Quebec musicians.

Each of the pieces on this album demonstrates Einaudi’s ability to create an atmospheric soundscape using harmony and rhythm, incorporating minimalist elements to great effect. This is not classical music in the style of Mozart and Beethoven: rather than being foundational material, melodic lines are the exception to the rule; throbbing, pulsing rhythms and large-scale harmonic shifts bring Philip Glass and Michael Nyman to mind, but with the striking contrasts of dynamic and character that are indicative of Einaudi’s unique compositional voice.

Corale, for example, juxtaposes vital and exuberant string passages with soft and subdued statements, the “choral” sung amidst the outbursts. Zoom (aptly titled, given our current reliance on the eponymous technology) combines a lengthy, slow opening with a speedy and chaotic conclusion – what begins as a seemingly ironic subversion of the title erupts into a virtuosic reflection of what it means to “zoom.”

Canto and Ai margini dell’aria are, in both title and sound, reflective of vocal music, featuring prominent lines, sometimes many at once, over discordant accompaniment. For those who appreciate Einaudi’s style and want to look beyond the keyboard works, Musique de chambre is a fine place to start.