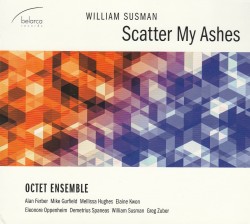 Let us begin with props where they are deserved. OCTET, the ensemble dedicated to performing William Susman’s music, and possibly others’ as well, is a good bunch of players. Their work on this just-released collection is fine and tight, although there occur a few instances of pretty rough intonation, notably toward the end of Triumph, the third movement of Camille. Among the instrumentalists, of whom the composer is one, a vocalist adds the human voice to the collective timbre. Mellissa Hughes more than meets the requirements; the beauty of her tone draws my ear to her and everything sounds like a song. There are in fact two song cycles on the disc: Scatter My Ashes and Moving to an Empty Space. Hughes delivers the text of Sue Susman, the composer’s sister, with remarkable clarity, and recording engineer John Kilgore does well to balance voice with ensemble.

Susman’s a kid in the candy store when it comes to rhythmic groupings, and it’s fun to follow along as he keeps dipping into one jar after another of irregular divisions of regular bars. The music is consistently upbeat, chipper, heartening. Consistency is not entirely a virtue, however, and one of the record’s faults is with the tonal palette of the music. He favours a kind of colouristic minimalism, tending toward bright polytonal alternating sound plateaus. Usually two per number. Often sounding very like the ones used in other numbers. Which begins to wear. On the ear. Like a series of incomplete sentences. Used for critical effect.

The third piece, Susman’s Piano Concerto breaks the mould at least in terms of variety of texture and tonality. Although he begins the piece with the same trope as he uses in Triumph (a C-major scale building into a cluster), by placing the piano in the role of soloist, he gains more freedom to explore textural possibility. And the second-to-last song, Begging the Night for Change (aptly) manages to step away from the narrow range of keys/tonalities favoured, and is to my mind the most effective piece on the disc.