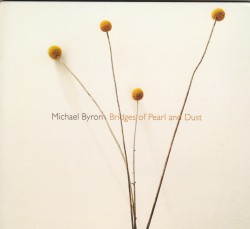 Byron’s compositions are marked by those varied influences, yet even his earliest works project a unique musical voice. One reviewer called it “shimmering minimalism.” The four vibraphones in Bridges of Pearl and Dust (2011), all played with élan by LA percussionist Ben Phelps, combine to express a complex, harmonically shifting sound field. Challenged on the first listening, I replayed the album four times. Over time, the logic and aesthetics of Byron’s musical imagination were revealed.

Filled with rhythmically percolating, interpenetrating melodic lines, the resulting tightly interwoven texture elicits, as the composer aptly put it, “a musical experience in the present tense.” And as I found out, one which richly rewards deep listening.