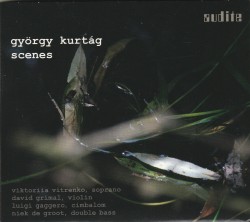 This album presents six previously unreleased songs and instrumentals by Kurtág, with lyrics from literary works in Hungarian, Russian and German. Scenes from a Novel, Op.19 (1984) for example, consisting of 15 extremely varied short movements, is a prime example of Kurtág’s oeuvre. With melancholic, introspective texts by the Russian writer Rimma Dalos, the songs feature virtuoso soprano Viktoriia Vitrenko, who nails the shifting emotional-tonal terrain. She is impressively supported by violinist David Grimal, bassist Niek de Groot and cimbalomist Luigi Gaggero. Given its masterful composition, imbued gravitas, dramatic and emotional range and the near-20-minute length of this series of epigrams, the work takes on an operatic magnitude. And I found the rest of the songs here just as compelling.

The Hungarian cimbalom is a stylistic and national marker on much of the album, a sonic through-line in addition to the voice, although novice listeners should not expect even a tinge of Magyar folkloric colour. The cimbalomist Gaggero makes a solo appearance at the end of the album on Kurtág’s Hommage à Berényi Ferenc 70. His soft, wistfully sensitive rendition feels like a relaxed puff of gently perfumed smoke after the intense multicourse sonic dinner we had just experienced.