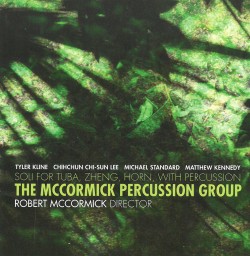 The award-winning Florida-based McCormick Percussion Group specializes in interpreting non-mainstream percussion scores, often collaborating with guest non-percussionists. Its latest album presents five works by four American composers featuring one or more non-percussion soloist backed by the forces of the MPG, the size of a modest orchestra.

Album opener Loam by Kentucky composer Tyler Kline is a substantial four-movement concerto for tuba and percussion ensemble. Metaphorically, it seeks to convey the notion of natural cycles: the earth being tilled, life being born from the soil and ultimately returning to it after death. Prize-winning Taiwanese-American composer Chihchun Chi-sun Lee’s attractive Double Concerto for Tuba, Zheng and Percussion Orchestra is perhaps the first work scored for these instruments. She effectively juxtaposes the expressive upper register of the plucked strings of the zheng with the lower wind tones and multiphonics of the tuba, the texture filled in by the spatially arrayed percussion sounds. While the first movement blends colour, timbre and gesture among these disparate instruments, movement II focuses on tuba and zheng solos. The final movement balances all three forces in an energetic finale.

Lee’s other score on the album, Zusammenflusses (Confluences), is a duet for zheng and percussion, distinguishing it from the concerto forms of the other works on the album. Using a non-tonal language, Lee deftly counterposes the differences and similarities between the plucked and bowed zheng, vibraphone and various cymbals.

This album, a journey into unexpected combinations of sounds and cultures, is one well worth taking in.