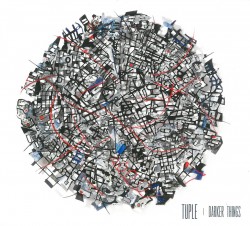 Here’s certainly something different, a bassoon duo playing contemporary concert music. Music scored for two bassoons apparently only reaches back a few decades, yet undeterred, bassoonists Rachael Elliott and Lynn Hileman formed their duo Tuple in 2006. They have played their unusual repertoire widely at American experimental art and music venues ever since. Darker Things, their debut album, displays their admirable technique and musicality, as well as the surprising tonal, timbral and emotional range possible on just two bassoons.

The earliest work here is by the celebrated Tatar-Russian composer Sofia Gubaidulina. Her masterfully crafted, impassioned Duo Sonata (1977) is characterized by one of her extra-musical themes: reaching for the divine in music. Frequent glissandi, intense chromatic motives, the use of micro-chromaticism (i.e. quarter tones) and multiphonics illustrate what Gubaidulina characterizes as striving for a “transition to another plane of existence.”

Lacrimosa (1991), by the idiosyncratic Dutch master composer Louis Andriessen, is a slow and deliberate work employing close atonal harmonies to create the keening quality suggested by its title. On the other hand multiple Grammy Award-winning composer Michael Daugherty’s Bounce (1988) explores a series of dramatic moments in various moods, tempi, dynamics and bassoon ranges. Black (2008) by American post-minimalist Marc Mellits stays light of heart throughout. Echoes of Steve Reich at his most ebullient permeate the work, however Mellits’ complex cross-rhythms and syncopations also reference rock’s straightforward tonality and forward-propelling energy.

Darker Things is a fun and thought-provoking album suitable for double reed players – as well as the rest of us.