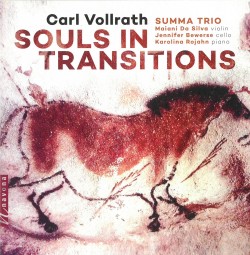 “When I first wrote these pieces,” says Carl Vollrath (b. New York City, 1931), “I had no set concept of what they ‘meant.’” Vollrath’s titles for the three trios and their umbrella title Souls in Transitions were added only after a colleague at Alabama’s Troy University, where Vollrath taught for 40 years, said that the first trio reminded him of prehistoric cave paintings. Vollrath’s colleague was undoubtedly responding to the sense of primitive mystery created by Vollrath’s use pf pentatonic and modal scales, ostinato piano bass-note “drum-beats” and repeated melodic and rhythmic motifs typical of religious rituals.

Vollrath’s title for the first trio, The Secrets of the Magdalenian Caves, references those prehistoric paintings. Tombs of Ancient Times, writes Vollrath, evokes “traditions surrounding passing in ancient Egypt,” in which “community members would bring food to the tomb” for use by the departed in the afterlife. Finally, Buddha of the Future reflects “how the image of Buddha has changed over time.” While all three trios share many stylistic characteristics, there is a subtle increase in lyrical warmth over the cycle, their titles perhaps suggesting the growing sophistication of their metaphysical world views.

Vollrath’s sure-handed scoring for violin, cello and piano creates effects almost orchestral in nature, ably performed by the Summa Trio, Los Angeles-based contemporary music specialists. The entire disc could easily serve as the soundtrack for a TV documentary about archaeological sacred sites; CD listeners will have to rely on their own imaginations.