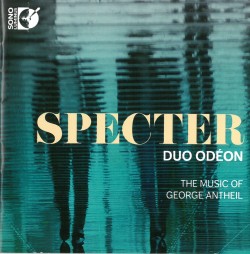 Praised in 1927 by Ezra Pound, who spoke of him in the same glowing terms as he did the painter Pablo Picasso, sculptor Henri Gaudier-Brzeska and writer Wyndham-Lewis – members of the Vorticists – George Antheil was hailed as revolutionary for his methods of harmonic conception. According to Pound, Antheil was annoyed with the term “architecture” when applied to music; he instead preferred the term “mechanisms” to describe his unique structural style.

Antheil, however, remained on the fringe of French music of the early 20th century and, despite attempts by performers to redress this situation, much of Antheil’s music remains very much in the shadows. This impressive disc might just change the equation if enough commercial muscle is put behind its promotion. Duo Odéon, comprising violinist Hannah Leland and pianist Aimee Fincher, have – first and foremost – selected important repertoire from Antheil’s canon. The dramatic Sonatina for Violin and Piano, together with the diabolically challenging Concerto for Violin and Orchestra – originally written for Pound’s violinist-mistress Olga Rudge – and the lyricism of Valses from Specter of the Rose present Duo Odéon in devastatingly good form throughout.

Every layer of Antheil’s inventive orchestration can be heard in Leland’s fiery double-stops which make the music leap off the page, and with the remarkable physicality of Fincher’s pianism, Duo Odéon brings Antheil’s genius to life again in an utterly memorable performance of his works.