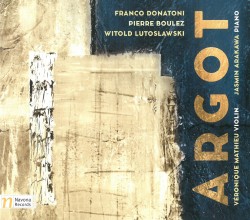 Canadian violinist Véronique Mathieu has positive mojo in spades: chops to burn, rock solid musicianship, solo and concerto gigs around the world and a doctorate in music. Not taking the typical path, Mathieu has chosen to play, commission and record primarily contemporary music, mostly by American and Canadian composers.

In Argot Mathieu – and Jasmin Arakawa, her pianist in the Lutosławski repertoire – has chosen a demanding program of late-20th-century classical music. She tackles substantial scores of three European heavyweights, Franco Donatoni (1927-2000), Pierre Boulez (1925-2016) and Witold Lutosławski (1913-1994).

The album is capped by the three works by Lutosławski for violin and piano. Recitativo e Arioso (1951) is early Lutosławski, imbued sometimes with an almost folk-like lyricism. Subito (1992), on the other hand, is among the composer’s last works, though in no way is it resigned. Rather, it is full of melodic playfulness with perhaps a musical tip of the hat to the Hungarian composer Béla Bartók.

Mathieu’s recital closes satisfyingly with the largest work here, Lutosławski’s five-movement Partita (1984). I understand it’s the work on the album most often included in contemporary violin recitals. In the virtuoso hands of Mathieu and Arakawa you can clearly hear why.