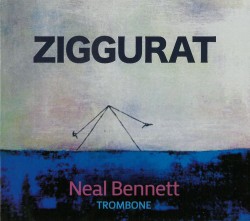 Matching personality to instruments in the brass section, trumpets are the alphas, French horns are quietly confident team players of generally modest demeanour; near the bottom you find the seeking souls who play trombone. Sensitive by nature, they mask this trait with tough-guy attitudes, fooling nobody. (The tuba runs the show, but nobody wants that to get out).

The last half-century has seen a surprising number of highly gifted sackbut virtuosi, players who turn their unwieldy horns on various dimes to produce striking results. Taking his place among them is Canadian Neal Bennett. His recent release, Ziggurat, offers works for solo trombone as well as a variety of choir sizes. Best known to local fans of new music will be Jocelyn Morlock, who contributed Sequoia for an ensemble of eight trombones and percussion and After the Rain, a solo piece. Scott Good’s Liquid Metal for ten (!) trombones, is a mighty enjoyable evocation of the foundry scene from Terminator 2.

Most of the composers are based in B.C., and his lone collaborator is percussionist Brian Nesselroad. Yes, instead of herding all available and capable practitioners for the multi-bone works (four of the seven tracks), Bennett worked all 34 (THIRTY-FOUR) parts up himself, layering overdub upon overdub. Sink that putt, I ask you.

The material is uneven. I’m nuts about Rob McKenzie’s blues-based Indigo but I feel Roydon Tse’s Continual Awakening, riffing on short-term memory impairment, is more interesting in idea than execution. Theatrics fail to work on a disc as they might on stage in Swedish composer Folke Rabe’s Basta, though the piece serves to highlight Bennett’s virtuosity. Finally there’s Ziggurat, by Farshid Samandari, a gorgeous dialogue with background voices and drums; it evokes the grand structure suggested by the title. A chattering coda ends the disc with a bang.