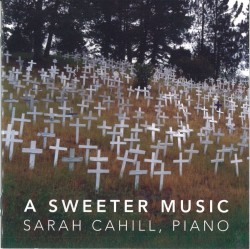 This CD has an admirable concept, which packs a powerful message in today’s society. The title comes from a quote by Dr. Martin Luther King, Jr. from his Nobel Lecture, December 11, 1964: “We must see that peace represents a sweeter music, a cosmic melody, that is far superior to the discords of war.”

The repertoire chosen for this CD reflects a myriad of responses from the selected composers. Terry Riley’s Be Kind to One Another (2008/2010) is a rag, which began as his late-night improvisatory noodling. This was not what I expected for a first piece on this themed CD. You would think an Arvo Pärt spiritual work would reflect the CD’s concept. However, I enjoyed the retro-sounding work and let myself really live in the musical moment and anticipated being surprised by the rest of the CD. Meredith Monk’s Steppe Music (excerpts) (1997) explores colour, texture, resonance and gesture. Frederic Rzewski’s Peace Dances (2007/2008) were written for Sarah Cahill. The brevity and unique sound for each of the seven pieces remind me of Henry Cowell’s Six Ings. These works are a wonderful addition to the contemporary piano repertoire. Kyle Gann’s War is Just a Racket (2008) has the pianist making a speech given by General Smedley in 1933. Although Cahill did an admirable job in her oration I would have preferred a low baritone to represent the general’s voice. Carl Stone’s Sonamu (2010) with electronics created ghostly apparitions of sound and Phil Kline’s 2009 The Long Winter (“Crash” and “Embers”) is recommended for the lovely tonal quality of “Embers.” Toning (2008) by Yoko Ono sounded like someone tuning the piano and although I understand the musical concept I felt this was the weak link in the CD. The Residents: drum no fife (2008) with text and narration by the Residents was a fitting end to this intriguing and worthwhile CD.

The program notes, most written by the composers, were excellent and informative. Cahill played with a sweet and sensitive tone and touch. Her technique was impeccable and I recommend this CD highly.