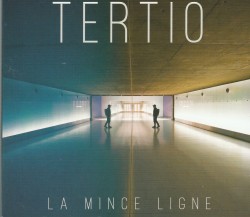 This was the first time this writer had come across up-and-coming, jazz-rock fusion group Tertio; and what a great discovery it turned out to be. The Montreal-based collective truly has their own distinctive style that is absolutely refreshing and pleasing to listen to. Drum and bass grooves for days, unique and interesting synthesizer work, fantastic trumpet riffs and catchy guitar melodies, come together to make this record a contemporary jazz, rock and even funk journey that will have any listener wanting to tap their foot or bop along.

More With Less starts off the record with a positively groovy track that showcases their distinct blend of “modern jazz, urban rhythms and the raw energy of rock” which they are known for. New One showcases soaring trumpet melodies courtesy of Andy King and a soulful, stellar guitar solo by Vincent Duhaime Perrault who is also credited with composing all of the group’s pieces. La truffe incorporates a positively funky and enthralling electric bass solo in which very apparent talent is showcased. Throughout the record, drummer Eric Thibodeau, bassist Alex Lefaivre and keyboardist Paul Shrofel provide the perfect backing to each piece, moving the melodies along with captivating chords and a constant, catchy rhythm. For those wanting a great and much needed pick-me-up within these dreary and grey winter days, this album is ideal for you. Truly a newer band worth keeping an eye out for.

Listen to 'La Mince Ligne' Now in the Listening Room 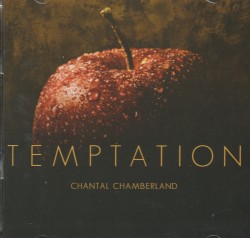 Renowned French-Canadian jazz vocalist and guitarist Chantal Chamberland’s recent release is a wonderful testament to her musical talent and unique style. Her trademark soulful and sultry voice shines throughout out the record, often accompanied by her melodious and flowing guitar melodies. Chamberland can almost be compared to the late, great Leonard Cohen based on some similarities in vocal styling and smooth genre-crossing ability, albeit she brings a distinct jazz and soul touch to the songs. The album is comprised of well-known pop, soul and blues songs which she has transformed and pleasantly enhanced through beautiful, mellow guitar and vocal stylings into a relaxing and all-encompassing musical journey.

Tracks Temptation and Beautiful Life start the listener off on a path that meanders softly through a sultry musical soundscape in which it is easy to get immersed completely, lulled and guided along by Chamberland’s melodious voice. Chasing Cars is a stellar string arrangement by Paul Intson that pulls you right into a magical dream world. A toned down, piano and acoustic bass version of Whitney Houston’s hit I Wanna Dance With Somebody is a pleasant and very pleasing surprise in the latter half of the album. Backed by talented musicians Dan Lockwood on drums, Intson on acoustic bass and Eric Boucher on piano results in a perfectly balanced sound. This record is a worthy addition to any jazz or pop aficionado’s collection. 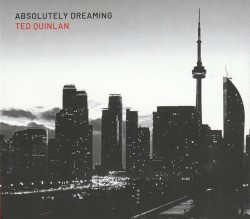 With the release of his new recording, guitarist and composer Ted Quinlan has again established himself as one of the most gifted, imaginative and technically skilled jazz guitarists around. For this very contemporary project, Quinlan has joined forces with three additional noted players – Brian Dickinson on piano; Kieran Overs on bass and Ted Warren on drums. Produced by Quinlan, the CD was also perfectly and authentically recorded by Steve Bellamy.

All nine tunes here were written and arranged by Quinlan, and seldom is one blessed to experience a jazz project of such luminosity. Things kick off with Cheticamp, which begins with a sense of urgent musical anticipation, tinged with sinuous guitar lines. These are perfectly complemented by the penultimate rhythm section work featuring an exquisite and percussive piano solo by Dickinson and inspired work by Overs and Warren. Of note is Not What it Seems – where sensual, languid guitar lines intertwine seamlessly with Overs’ warm, fat bass sound. The group is like a single-celled organism – mutating, dancing and swinging through the unknown inclusive universe in total symmetry.

Also a delight is Building 8 – a jaunty, bop-ish track, with an almost 1950s West Coast jazz feel, and yet completely fresh – featuring a stunner of a bass solo from Overs as well as Quinlan’s masterful playing throughout. Quinlan never overplays and every note has gravitas and meaning. X Marks the Spot is a true dynamic standout, displaying Quinlan’s diverse sensibilities and Warren’s exciting and combustive drumming. I imagine the reserved face of the late jazz guitar legend, Jim Hall, listening to this CD and smiling with his characteristic understated grin of approval and joy. 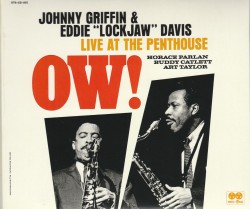 Perhaps inspired by legendary cutting contests between Lester Young and Coleman Hawkins, quintets featuring two tenor saxophones became a familiar jazz format in the 1950s. The most prominent paired Gene Ammons and Sonny Stitt, another Al Cohn and Sonny Stitt. Johnny Griffin, a veteran of the Thelonious Monk and Art Blakey groups, and Eddie “Lockjaw” Davis, a star of the Count Basie band, were relatively late to the genre, pairing up in 1960, but they represented the format’s peak.

Accompanied by their New York rhythm section in these 1962 performances from Seattle’s Penthouse, the Griffin/Davis combination combines individual brilliance with furious swing and shouting enthusiasm, a celebratory energy that sometimes testifies to their shared roots in rhythm and blues. Griffin was famous for the sheer speed of his lines, playing incandescent strings of precisely articulated arpeggios, while Davis had a vocalic genius, adding a different spin, emphasis or articulation to every note he played, sometimes sounding like he was swallowing notes.

The band adopts material from varied sources to their purposes, whether it’s rooted in bop, swing or Kansas City blues. The title track, a Dizzy Gillespie composition taken at a medium swing tempo, highlights Davis and Griffin’s contrasting approaches, while Lester Young’s Tickle Toe is capped by the exuberant, high-speed inventiveness of their exchanges. Griffin’s rich balladry on Duke Ellington’s Sophisticated Lady may slow things down, but there’s a special vitality heard throughout. 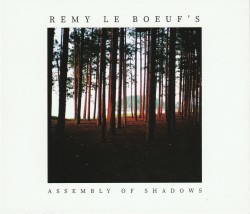 My introduction to Remy Le Boeuf was an amazing Le Boeuf Brothers concert in 2017 at the Jazz Room in Waterloo. Remy (saxophone), and his brother Pascal (piano), have recorded several albums which push the boundaries of jazz composition and improvisation including 2016’s Imagist, a collaboration with the JACK quartet.

Assembly of Shadows, contains the five-part title suite and two stand-alone pieces, Strata and Honeymooners (the latter, an elaborate development of an Ornette Coleman tune). Le Boeuf is writing for a 20-plus-member band and his works are complex and layered; they contain innovative orchestration and leave room for individual performers to shine with improvisatory sections. (Anna Webber’s flute playing on Strata and Alex Goodman’s quietly elegant guitar work on the second movement of the suite are noteworthy.) I recommend searching for Strata on YouTube and watching the highly engaging live performance.

The Assembly of Shadows suite tells the story of a child who becomes lost in a forest, falls asleep, then wakes to dance with the trees and is eventually guided home. All five movements contain exciting and nuanced material and the final A Light Through the Leaves ends with a beautiful and elegant section with full horn tones with an inner moving line leading to a delicate flute and piano duet (which ends with the child going to sleep safe in her own room). Assembly of Shadows is modern, complex and highly recommended. 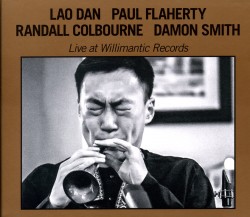 They’re involved in every other form of music, so why shouldn’t Chinese musicians play improvised music? Isolation and lack of venue are drawbacks, explains Mainlander Lao Dan who is featured on this CD. Luckily Dan, who plays alto saxophone, suona and bamboo flute, was able to connect with Americans, tenor saxophonist Paul Flaherty, percussionist Randall Colbourne and bassist Damon Smith to produce this US-recorded 77-minute slab of Free Jazz.

Playing saxophone on tracks such as Noise & Light, Dan creates call-and-response patterns encompassing snarling, triple-tongued smears and altissimo trills, and even supersedes the veteran saxophonist’s output with bloodcurdling shrieks and frog-like croaks. Oriental exoticism isn’t a factor with his other instruments, but the aural Long Shadows he casts on that track reveal more relaxed flute pitches mixed with a spiccato tang from Smith. Meanwhile the suona’s irregular trills and pinched multiphonics on Winter Dawn feature irregular surges that complement Flaherty’s sonorous saxophone split tones and eventually create a guileless theme before diminishing into atom-sized peeps.

With both horn players sometimes circular breathing and invariably shooting notes past tonal limitations, Smith’s deep woody strokes and obbligato throbs, plus Colbourne’s rumbling affirmations and fluid pops, function both as backing chorus and provocation, urging the others to create even more frantic blowing. Still, at one point Dan completes a ferocious, split-tone solo by vocally screaming. Whether this is the result of excitement or joy at finding simpatico partners is open to conjecture. 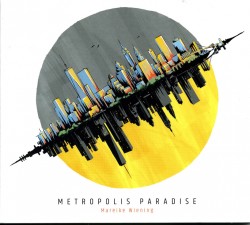 Surprising as it may seem, drummers are often accomplished composers and Nuremberg-native Mareike Wiening confirms this truism on her debut CD. Her eight tunes are interpreted by a selection of New York’s top contemporary players, which besides Americans, pianist Dan Tepfer and tenor saxophonist Rich Perry, include fellow German, bassist Johannes Felscher, and ex-Torontonian, guitarist Alex Goodman.

Basically Wiening’s strategy is to create subtle sprightly lines, centred on harmonies from Goodman’s fluid fretting and Tepfer’s stacked triads and smooth key changes. Once established, Perry’s sometimes biting and always-flowing solos buoy the melody atop rhythm section swinging. Besides leaving space for frequent single-string guitar extensions and even a bass solo, Wiening’s brush and stick work is also notable for its taste.

Tunes range from charming or moody to ones such as the title tune and 2 in 1 which give scope to saxophone slurs, and rolling chords that ricochet from the guitarist to the pianist. The challenging Misconception is the foot-tapping standout, however, as Tepfer digs in with harder accents, Goodman hammers out the exposition while drum rolls and rattles characterize the stop-time finale.

If the CD has a drawback, it reflects Wiening’s confidence, or lack of same, as a composer. She has demonstrated that she can write subtle melodies that are lightly rhythmic while retaining sophistication. But as Misconception demonstrates by moving outwards from this lyrical comfort zone she can also create sounds that animate as well as they assuage.