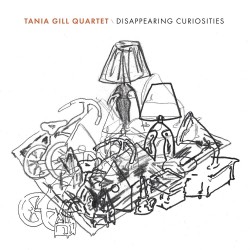 It’s been 12 years since the release of the Tania Gill Quartet’s debut Bolger Station, an invocation of Northern Ontario, and that’s far too long between recordings for a composer, pianist and bandleader with Gill’s special talents. Each of her compositions here is a fresh expedition, a different possibility in both style and mood. The latest edition of the quartet retains trumpeter Lina Allemano, an ideal foil as the co-lead voice, with support coming from newcomers to the group, bassist Rob Clutton and drummer Nico Dann, each adding illuminating nuance and animation.

Gill’s compositions have a rare breadth, from the formal clarity of her unaccompanied theme statement on the opening Marsh Music to the chromatic tangle of lines that she and Allemano create on Climate Striker. Some of the pieces are built of contrasting segments, sometimes adding new thematic content between improvised variations, creating particularly complex patterns of development on the later pieces in the program, like Apology, marked by Clutton’s arco solo which approaches a cello-like timbre. Up-tempo pieces, like Jaunty (featuring Gill on a vintage Realistic MG-1 synthesizer that she deploys here with a marked subtlety) and Knocked Over, can take on a wild playfulness, multiplying the complexity.

Along with eight of Gil’s compositions, the group also performs People Gonna Rise Like the Water, imbuing the climate activist anthem with a hymn-like nobility. 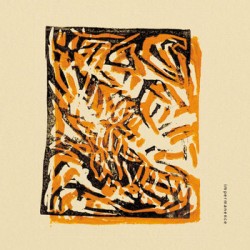 Impermanence is a recording of duo improvisations by two cellists, the Brazilian Violeta García, primarily active in improvised music, and Quebecoise Émilie Girard-Charest, who has been primarily active in contemporary composed music, but whose adeptness as an improviser has been abundantly clear in recent duet performances with saxophonist Yves Charuest.

The five improvisations are titled merely I to V, with no effort made to add a programmatic dimension through verbal association. Similarly, there’s no detailed account of secondary materials, no hints whether the final track is created by amplified cellos played with bows covered with iron filings in an echo chamber shared with turbines. Perhaps it’s just a miracle of technique, possibly aided by close recording. The music is, in short, astonishing, whether it’s a dance of skittering harmonics, a ping-pong match of guttural, low register glissandi, soaring anarchic runs, microsecond timbral shifts, wondrous rhythmic counterpoint, bow scrapings or sustained microtonal cries.

What is most beautiful about this recording may be the resonance of and its fidelity to, that title: Impermanence. The music is an insistent present, a presence, a mercurial shared consciousness. It lives in the instant of cognition, insisting on the listener’s attentiveness to that instant, rather than dragging along the past as part of an ongoing, imagined formal construct. A sudden burst of Messiaen-ic birds in the midst of III is just that, something for which to be grateful as one moves on. 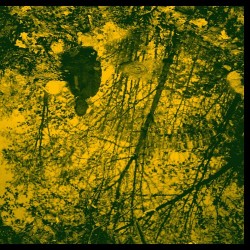 This is the third release by Toronto-based alto saxophonist Brodie West’s quintet, retaining the same stellar personnel: pianist Tania Gill; bassist Josh Cole; drummer Nick Fraser; and multi-instrumentalist Evan Cartwright, here contributing drums, vibraphone and guitar to significantly expand the group’s palette. West’s background includes extended work with the eclectic Dutch school of improvisers, including drummer Han Bennink and The Ex, musicians whose work extends from free jazz to syntheses of anarcho-punk and African dance music. The result is that West’s creativity ranges freely amidst existing genres, creating sudden juxtapositions of rhythm and timbre, from the glacier-slow, almost ceremonial Fortress to the piping life of Haunt and the wistful dissonance of the title track.

Grotto may begin as a slightly murky, film noir ballad, but West’s thin, upper-register tone and quarter-tone pitch bends press it far afield, to a kind of science-fiction melancholy. His compositions can continuously shift ground. Inhabit III begins as a slow exchange of single notes by Gill and Cole before adding Fraser’s drums and Cartwright’s guitar; then West joins the complex rhythmic weave with a simple melody, only to shift suddenly to a rapid, pointillist sequence with Fraser and Gill.

If the music first fascinates with a deliberated disjointedness, it’s the compound mystery and intensity that will keep a listener engaged. West is among the most creative figures in Canadian music, reconstituting long-running conventions into musical puzzles as engaging as they are disruptive. 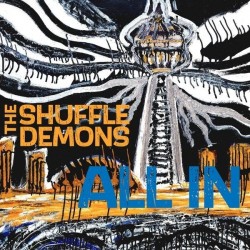 The Shuffle Demons formed in 1984 by busking on the mean streets of Toronto and built their show and music into ten albums with much touring around the world. In fairness I must disclose sharing a Guinness World Record with these enterprising folks: we played the theme to Hockey Night in Canada with 900 other sax players in Dundas Square in 2004!

The Demons wear loud, colourful costumes, perform with enthusiasm and humour, and their music is exciting and fun. The personnel has changed over the years but their orchestration is consistent: three saxophones, upright bass and drums. Their latest album is All In (which could actually describe almost any of their musical performances or recordings) and features compositions by band members Richard Underhill (with six tunes), Matt Lagan, Mike Downes and Stitch Wynston.

There are no ballads on this album! One of my favourites is Wait, What? which begins at a blistering tempo with a melodic sax line I’d describe as “cosmopolitan” which is then harmonized and rolls into a bop solo. There is a great ensemble section in the middle, more solos and then the bright melody again for the outro. Watch Your Step has the funkiest riffs and much of the tune is filled with excellent ensemble work over delightful noodling melodies. In fact, all the tunes are melodic and inventive with energetic solos over top of the hard-working rhythm section of Downes and long-serving Demons’ drummer, Wynston. All In swings and grooves for all ten tracks. 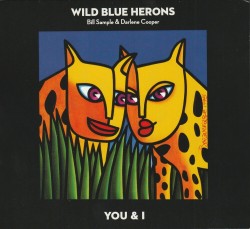 Wild Blue Herons perform as a duo here. Vancouver-based husband and wife and longtime musical partners Bill Sample (piano/keyboards) and Darlene Cooper (vocals) share their love of standard songs inspired by the great women of jazz, and of course, of each other in this fabulous release. Recording two original songs and ten covers in their home studio during the 2020/21 lockdown was an experience that, as the liner notes say, “led to a huge technology learning curve.”

The disc begins with I Wish I’d Met You which opens with brief piano single notes, then vocal entry. Love the matching colours of the held piano and vocal notes, back and forth piano countermelody answering the vocal melody, and clear vocal articulation and pitch. The 1930s’ romantic classic I’ll Be Seeing You features heartbreaking yet positive-for-the-future smooth vocals above detached piano chords and single notes, and a mid-piece jazz-tinged piano solo. Cooper and Sample themselves composed the slow song Don’t Know How to Love You with Cooper’s loudish yet never over-the-top vocals above Sample’s florid piano stylings, building to an intense ending. The title track by Stevie Wonder grabs the listener’s concentration with its slower straightforward storytelling rendition, as voice and piano are like two soloists instead of lead and accompaniment.

Cooper and Sample’s close attentive listening and interactions result in a beautiful, sensitive jazz release recorded and produced to high standards. They make it all sound so easy! 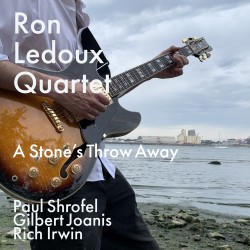 A Stone’s Throw Away is the glorious sound of a rhythm section centering tastefulness and synergy in their playing. Simplicity is key here; the listener is never at any point overwhelmed with sound, and the musicians make a point of ceding space to each other whenever needed. This creates a unique feeling of cleanliness, by removing all superfluous clutter in the arrangements and ensuring no ideas are suppressed.

Concerning the ideas present on the album, it’s a goldmine of infectious melody writing. It is quite the feat that across 11 tracks (all of which were composed by guitarist Ron Ledoux and arranged by bassist Gilbert Joanis), neither the qualities of originality nor sophistication diminish in the slightest. It’s truly one of those albums that leaves an indelible enough impression to the point where the entire track list is immediately singable upon initial exposure. From the tenderness of Windmills to the unison guitar/bass chorus in Get It Out of Here, the consistency is astounding. The phrases are structured in a way that they possess a vague sense of familiarity and nostalgia, almost making it feel like these songs have existed since the beginning of time.

The band’s approach to improvising complements the existing moods perfectly, opting for concision and clarity as points of emphasis. Joanis and drummer Rich Irwin’s musical bond borders on the clairvoyant at times and adds another level of vitality to the music. 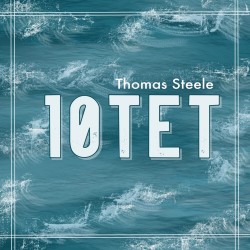 Thoroughly polished and staggeringly intricate, Thomas Steele’s latest release is a marvel in all its controlled fury. Unlike his last album The Bends (which featured two chordal instruments in a quintet format), Steele opts to go entirely without comping instruments here. Consequently, his horn section boasts eight parts, and the ensemble still manages to do an effective job of relaying substantial harmonic information thanks to consistently spotless arranging (particularly that of Dennis Kwok).

Texturally speaking, the music is captivating. Through all the constantly moving structures, stabs and jabs in the arrangements, a persisting atmosphere of cathartic density is built; all while maintaining lucidity in the compositional aspects. The rhythm section of bassist Evan Gratham and drummer Jacob Slous covers a fair bit of ground between them, meshing masterfully with immaculate time feel while laying a foundation of rhythmic clarity for the rest of the group. Also indispensable is the versatile baritone saxophone/bass clarinet playing of Alex Manoukas, which adds an extra dimension of low-end and greatly adds to the overall coherence.

Steele’s bandleading style feels equal parts selfless and distinctive. He can continually achieve a very particular sound out of such unconventional instrumentation, and yet he also gives way for the complete expression of each individual musician. Everyone is given a significant feature at some point, and three of the seven tunes are penned by contributors aside from Steele. Jacob Chung’s February Flowers is a standout.