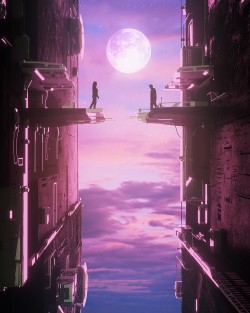 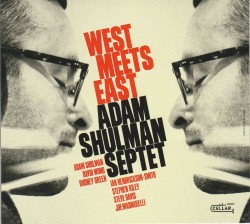 San Francisco-based star pianist, bandleader and composer Adam Shulman has let his passion for the golden era of jazz shine with this latest release featuring a stellar gathering of musicians who really bring a unique light to each piece. With key talents such as David Wong on upright bass, Rodney Green on drums and Joe Magnarelli on trumpet, the tracks take on a life of their own, as everyone’s contribution brings out a different facet and aspect within the sonorous melodies. The album does a great job of showcasing Shulman’s talent as both a pianist and composer. Seven out of eight pieces are penned by him and bring forth a tremendous horn section balanced out by driving bass lines and sultry melodies from the keys.

The record starts off with a toe-tapping tune titled Nickel and Dimed and is a little wink at a “borrowed chord structure from Tin Pan Alley’s Pennies from Heaven.” It’s a traditional swing piece that has an addictive groove to it carried forward by Green’s constant shuffle, Wong’s moving bass pizzicato topped off by Magnarelli’s soaring and bright trumpet melody. Lean and Mean is a unique composition with the main tune following a stepped pattern that meanders along the scale and truly shines a spotlight on the gifted horn section in the septet. Traditional jazz flavour with a renewed breath and twist to it makes this album a new staple for any jazz enthusiast. 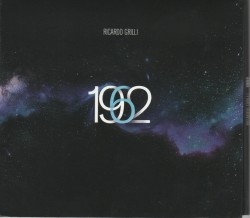 An example of bona fide musical time travel, Brazilian native Ricardo Grilli has released a truly haunting and meaning-laden set of tracks that lead us into another period in both musical and personal history that has shaped who the guitarist is now. The follow-up to a similarly themed album, 1954, this record is a reflection of Grilli’s thoughts on a meaningful era which he expresses through “[focusing] on the idea of evolution and change that characterized the 1960s” and embedding it into his music. Helping to realize his musical vision, the guitarist called together a quintet of famed musicians like saxophone great Mark Turner, pianist Kevin Hays and bassist Joe Martin.

Taking cues from the title, 1954-1962 is an ethereal and meandering piece that connects the previous record to this one, a true bridge through time with Grilli leading us on a spacious journey with his melancholic guitar melody. In Coyote, a simmering and sultry samba-flavoured song, we hear the Brazilian hark back to the history and culture of his homeland, a possible reflection of the tumultuous state his country was in at the time and a longing for something familiar. Voyager, a fittingly titled piece to close out the album, carries a note of hope and exploration within, the rollicking piano tune and driving drum groove letting us know that although our musical journey has come to a close, the future is always a continuous voyage. 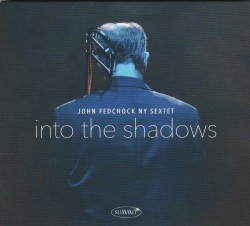 New York City-based John Fedchock has long been an internationally regarded trombonist, with an extensive list of credentials. On his tenth recording as a leader, Fedchock also serves as producer/composer/arranger in order to create a magnificent celebration of the jazz sextet. Perhaps better known as the leader of his multiple Grammy-nominated New York Big Band, Fedchock has chosen here to highlight the opportunities for musical and unique creative writing options while maintaining a sleek and mobile blend. Fedchock first debuted his sextet 20 years ago, and the gifted members include first-call jazz artists Scott Wendholt on trumpet and flugelhorn; Walt Weiskopf on tenor saxophone; Allen Farnham on piano; David Finck on bass; and Eric Halvorson on drums.

Of the eight compositions here, five are written by Fedchock and three are well-known standards that are rife with harmonic/dissident arranging choices – maintaining a healthy balance between pure swinging and improvisational exploration. Up first is the high-octane RSVP, a rhythmic, Latin-infused leader-penned piece, cleverly utilizing the changes from the standard Invitation and featuring masterful soloing from all, most especially tenorist Weiskopf who burns like a bonfire throughout. Alpha Dog’s Art Blakey-ish shuffle (kudos to Halvorson) is a total delight, replete with masterful solos from Fedchock, Wendholt and Farnham.

The languid title track plumbs the depth and solitude of the creative process itself, while the sextet displays some of the most symbiotic playing on the project, parenthesized by Fedchock’s sonorous trombone. Finck’s considerable skill with Latin modalities is clearly ascertainable on the compelling arrangement of Star Eyes (Raye/DePaul) and the up-tempo closer, On the Edge, embraces everything that the art form of jazz is about and also transports this sacred musical expression boldly into the future. 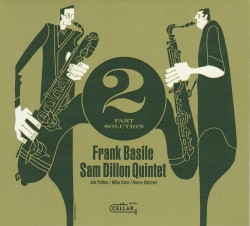 In the art world, to make something distinctive one doesn’t necessarily have to aim for unprecedented or boundary-pushing new forms; Frank Basile and Sam Dillon have proven that relying on the tried and true can be equally effective. On their latest release, Two Part Solution, this approach takes the form of straight-ahead standard jazz arrangements. Musically speaking, the main selling point here is the tenor/baritone sax interplay that anchors each track. Basile’s rich baritone soars over the lavish mix, commanding the ensemble with impeccable phrasing and making the quintet sound almost as full as a big band. Dillon’s sheer virtuosity on tenor provides a perfect musical foil.

The original compositions that Dillon and Basile have provided are highlights of the collection, easily measuring up to the well-chosen standards of the set. In particular, Dillon’s Monk-esque title track is a thing of beauty, featuring some of the most elegant and intricate harmony on the album. It is thanks to the unusual bottom-heavy tonality courtesy of the dynamic band-leading duo, the production efforts of Cory Weeds and the powerful contributions of drummer Aaron Kimmel that the quintet achieves such a gratifyingly dense sound.

While far from the most left-field jazz recording this year, Two Part Solution breathes refreshing new life into a sound that has too often been presumed dead. 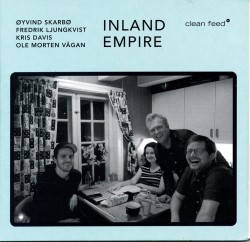 A mercurial stylist who often unexpectedly changes course in the middle of a tune, Davis’ Surf Curl vibrates with intermittent keyboard fluctuations. These quicken alongside reed peeps and tambourine-like smacks to invest the performance with nervous energy. Contrast this with her Arcadian patterning, evolving in tandem with Ljungkvist’s rustic clarinet squeezes on his Jag Vet Inte. It’s a tune that’s so understated that Skarbø’s beat is the result of pulsed brush work. He makes up for that on his own Fighter which carves out space for a pugnacious drum break that’s all splatters and ruffs within a composition that’s as slinky and mysterious as a cop show soundtrack. Vågan’s string thumps here and his distinctive woody reprise on his tunes Truffle Pigs and Katmandu Stray Dogs are the bassist’s only features. But his cohesive pulse is a constant. Like Davis’ crimped asides or Ljungkvist’s theme variations cycling through multiple pitches and volumes, technical interludes usually evolve in duo situations or only briefly as singular showpieces. Group sensibility and keeping cohesion paramount throughout appear to be the CD’s aim. It fits with the common view of the musicians’ respective countries as reflections of non-aggressive competence. Clichés aside, musically this is one Inland Empire worth a visit. 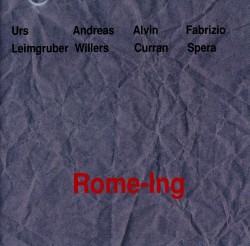 Not a formal suite, but anything but formless jamming, the four interlocking improvisations that make up Rome-ing confirm creative unity among sophisticated musicians. Doyen of the quartet is American composer Alvin Curran, long a Rome resident, on piano and sampler. His associates are Swiss soprano/tenor saxophonist Urs Leimgruber, German guitarist Andreas Willers and Italian drummer Fabrizio Spera.

Although pioneered in the 1960s by Curran in MEV (Musica Elettronica Viva), his samples and Willers’s electronics are used sparingly. There are vague suggestions of a  sharing space with accelerating reed whistles and oud-like strums on Part III, while a sampled lyric soprano voice warbles intermittently throughout the disc often ornamenting the narrative when pressurized licks from anyone become too harsh.

Other than that, the creation unfolds logically with trilling reed split tones and tremolo keyboard runs defining the exposition, backed by twangs, buzzes and shakes from the guitarist and drummer. The nearly hour-long improvisation slows and calms at the end following a final bluesy detour from a horizontal saxophone line. Earlier sonic deviations and dissections make room for logical asides such as repeated tremolo patterns and swift glissandi from Curran; Leimgruber’s passages circular breathed to display strident whistles or Bronx cheer-like tongue stops; Willers’ strums and flanges; and Spera’s unforced clanks and clip clops. Narrowed when needed or expansive elsewhere, the ongoing suite sequences expose just enough unexpected motifs and timbral insertions to make the program consistently fascinating.