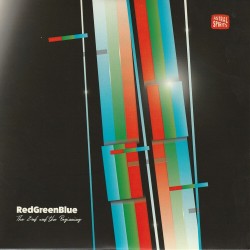 The End and The Beginning
RedGreenBlue
Astral Spirits AS190 (astralrgb.bandcamp.com)

The End and the Beginning defines the slow burn; establishing a drone and then, armed with nothing but patience, allowing it to grow organically into something truly profound. The whisper of synth wizard Paul Giallorenzo’s reassuringly consonant droning note both begins and ends the album. At first so subtle you almost need to squint to hear it, this initial monophonic drone in The Beginning signals the only viable musical direction to be skyward, and then in The End allows space for the rubble to clear. Charlie Kirchen comes in shortly after, creating a simple bass line that lends itself to the tranquil atmosphere while managing to add as much harmonic context to the drone as needed, not unlike what Charlie Haden provided to the music of Don Cherry.

It is on this foundation that the music begins to gather wholly satisfying momentum. Citing Terry Riley as an influence, RedGreenBlue accomplishes something staggering, managing to evenly bridge the forms of minimalism and improvisation, revealing their marriage to warrant unceasing exploration. Percussionist Ryan Packard’s ability to impeccably imply pulse while stealthily adding aspects to the groove is key here, allowing for the sound to expand outward while also shifting imperceptibly. The end of The Beginning is an undeniable climax, but the stripped-down Giallorenzo solo passage during the next piece is every bit as evocative. In this kind of music, process is given equal emphasis as product, and RedGreenBlue embody that concept.