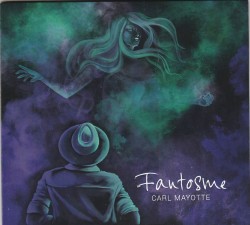 Mayotte, who performs masterfully here on electric and fretless bass, has also assembled a hungry pack of young jazz lions, who perform this challenging material with boundless energy as well as technical thrills and chills. The cast includes Gabriel Cyr on electric guitar; Francis Grégoire on keyboards and synthesizers; Stéphane Chamberland on drums; Damien-Jade Cyr on tenor, alto and soprano; Jean-Pierre Zanella on alto and flute; Patrice Luneau on baritone; Remi Cormier on trumpet; Emmanuel Richard-Bordon on trombone; Luke Boivin on percussion and Raymond Gagnier on voice.

First up is the two-part suite, Le Fantosme. Part 1, Le Poltergeist, is spooky and otherworldly, with synth-infused structures and a theatrical use of voice and breathing. Part 2, Le Polisson segues into a face-melting drum solo from Chamberland, followed by a funky big band explosion, replete with a fine bass solo and a caustic, Jan Hammer-ish synth solo. Sumptuous flute work by Zanella kicks off the fast-paced O Commodoro, and the spirit of Jaco Pastorious can be felt by Mayotte’s bass work throughout this invigorating composition. Cormier’s volcanic trumpet adds incredibly, while the band morphs into a second-line influenced passage, and then back to the lilting head… sheer beauty. A stand-out is Marise – an ego-less portrait of Mayotte’s incredible skill and melodic sensibility.