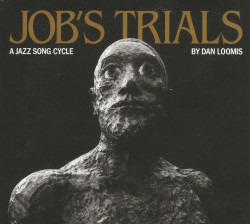 With this release, New York City-based producer, composer, librettist and bassist, Dan Loomis, has created a 14-part, contemporized and unusual look at the biblical story of Job. The recording (to quote Loomis) is “…a song cycle and narration that offer a fresh look into a universal story exploring why bad things happen to good people” – perhaps a story only previously explored in a contemporary light in Neil Simon’s Job-focused hit comedy God’s Favorite. All compositions here are by Loomis with the exception of the project closer, Dear Lord by John Coltrane.

The Narrator (A.K.A. Satan) is masterfully performed by Broadway Star Daniel Breaker (Hamilton, The Book of Mormon), and the balance of the company includes vocalists Yoon Sun Choi and Song Yi Jeon, guitarist Jeff Miles and drummer Jared Schonig. Highlights of this unique jazz song cycle include Abundance Overture, where a funky, insistent bass supports the heavenly choir of Choi and Jeon, as they proceed through a complex scat section, underpinned by dynamic guitar work from Miles as well as relentless, bombastic drumming by Schonig.

As Job sinks into despair and confusion, Do Not Cover My Blood also takes a dive into the darker aspects of the human psyche, as the vocalists bob and weave through a cacophony of emotions and bop motifs. Although not a blues in the traditional sense, Job’s Blues focuses on our hero as he begins to bargain with his God with a rapid fire tempo, propelled into hyper-drive by Miles and Loomis. The closing salvo, Dear Lord, re-sets Coltrane’s lovely tune – leaving us with hope for the triumph of the unconquerable human spirit.