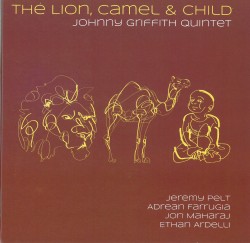 This could well sound as if it is tenor saxophonist Johnny Griffith’s Le carnival des animaux, except that The Lion, Camel & Child, his menagerie – unlike Saint-Saëns’ – is affectionately symbolic and celebrates the iconography of two animals and a child, albeit that it is also written with his musician friends in mind. The result is a vivacious program of music which unfolds in the characteristic manner of Griffith’s rolled notes and elliptical phrases. When egged on by trumpeter Jeremy Pelt, however, the sound can emerge like a series of charmingly guttural Welsh-bound “gogs” that might seemingly recall the sound of his distant ancestors from another time.

Griffith’s repertoire is wholly homegrown and is centred in the jazz tradition, written for a quintet of musicians who parley with the familiarity of old friends, which indeed they are. The album leads off with the suite after which it is titled. The work’s opening is powerfully atmospheric – darkly lugubrious chords that are interpolated into one theme after the other built upon a kinetic restlessness that drives the whole suite until the fourth movement, its denouement, which resonates with characteristic vibrancy belying its title.

Throughout, Griffith’s tenor saxophone leads the charge, ringing in the changes in mood, structure and tempo. He is also joined in the musical adventure and with poetic melodicism by pianist Adrean Farruggia, and powerhouse rhythmic teamsters, bassist Jon Maharaj and drummer Ethan Ardelli.