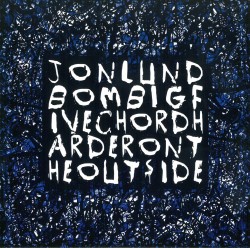 The “avant jazz guitarist” Jon Lundbom has an eclectic and inventive history which includes studying jazz and classical guitar in Chicago and New York; playing in Bryan & the Haggards, a New York-based alternative Merle Haggard cover band; and releasing eight recordings with his own group, Jon Lundbom & Big Five Chord. (I fell in love with the Haggard’s 2013 Merles Just Want to Have Fun featuring Eugene Chadbourne).

Harder on the Outside is intense, aggressive, fun and solidly grooving. It is a combination of hardcore/alternative fusion with solid beats and free-form soloing. The “beats” come from a longer-term project between saxophonist Bryan Murray and Lundbom which is forthcoming, but Lundbom was inspired to record live versions of those songs with the Big Five Chord (Lundbom with Jon Irabagon on alto and soprano saxophones, Murray on tenor and balto! saxophones, Moppa Elliott on bass and Dan Monaghan on drums).

Two examples of this album’s range are: People Be Talking which features a 6/4 metre propelled by an eccentric bass and drum groove, melodic head, sputtering and energized tenor solo by Murray and then a reverbed, ethereal guitar solo from Lundbom. Prednisone is slower with a cautious, crawling melody played in fourths with the saxophones. Justin Wood (a guest “sixth chord”) plays a lyric alto sax solo and then Lundbom finishes with a fuzzed-out guitar displaying very solid fusion chops. None of the tunes end with the traditional recap of the melody; the solo finishes and that’s it. The beats are seriously heavy and the playing is intense.