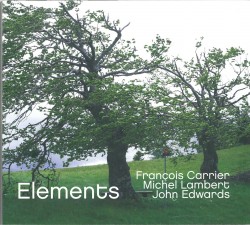 François Carrier is a Quebec- born alto saxophone player with a decades-long history playing free improvisation with musicians around the world (including Paul Bley, Gary Peacock and Dewey Redman). He has released over 30 albums recorded for many European labels that specialize in avant-garde music. In 2001 Carrier won a JUNO for his third album Compassion and has stated it is “important to record as much music as possible. You learn a lot just by listening to what you have done together and since everything is improvised, you will never do the same thing twice.”

Carrier and drummer Michel Lambert have played and recorded together for years and they have toured Europe, Asia and Canada. Elements, released by UK label FMR records, also includes British bassist John Edwards and has three live performances by the trio: Wilderness, recorded at the 20th Jazz Cerkno festival (Slovenia 2015), and Elements and Roar of Joy from Iklectick (London, UK, 2016).

Carrier and Lambert’s long history together ensures their musical intuition is highly attuned and their playing can change quickly from staccato and aggressive to lyrical and introspective. Edwards is an integral part of these performances and it feels as if he has played in this group for years. The first piece, Elements, begins sporadically, with Edwards playing notes off-rhythm and switching to his bow (which he uses frequently and effectively throughout the album). Carrier plays short, aggressive bursts and then Lambert enters with off-rhythm backing percussion. The piece moves through several phases trading solo parts, and around the four-minute mark Carrier introduces more lyrical lines with a sound reminiscent of Ornette Coleman. The album captures the spirit and energy of their live performances and repeated listening reveals the complexity of their shifting musical textures.