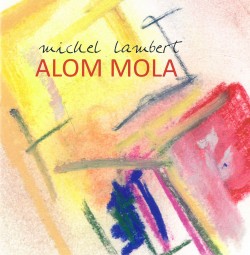 Any music that has been inspired by the work of Michelangelo Caravaggio (1571-1610), the Baroque artist who worked in Naples, Sicily and Malta, and flavoured by the rumblings of Steve Lacy’s legendary French bassist Jean-Jacques Avenel as well as Jan Jarcyzk, the pianist and pedagogue from Montreal, has to be symphonically beguiling. Or put another way: why expect anything less from a riveting musician enthralled by three iconic characters from three disparate time-space continuums? Still you would be remiss if you did not admit to many moments of breathlessness not only during Caravaggio, ténèbres et lumières, but all through Alom Mola, as you might expect from the ingenious drummer Michel Lambert, whose inspiration is drawn from Mayan mythology as well as the Baroque and modern art history.

The musicians’ traversal of Lambert’s complex music is remarkable. The music throughout Alom Mola is crafted on an orchestral soundscape that manages – somehow – to be monumentally miniscule, enormously small. Each of the five works presents a sound environment of wisps, susurrations, noises and the odd pitched note. Key to the music’s success, though, is Lambert’s subtle layering of different instrument groups – brass, woodwind, strings, piano and a whole universe of percussion instruments and devices. The resultant music is impossibly brilliant; evoked by different shades and densities of an aural patina passed around various orchestral permutations to produce a veritable ecosystem of music that is at once delicate and powerful.