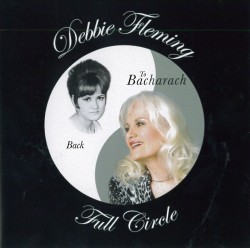 I need to confess right off the top that I’m a sucker for a Bacharach-David song. I consider them to be one of the top pop songwriting duos in an era when songwriting was king and duos like Lennon-McCartney, Elton John & Bernie Taupin and so many others were putting out great music. So when veteran Toronto singer Debbie Fleming announced she was working on an album of Bacharach-David covers I was pumped. Fleming’s background as an in-demand studio and group singer equips her not only with strong vocal skills but also with arranging expertise. I’m also a sucker for covers that put a twist on the original song. (Otherwise why not just listen to the original?) So the takes on these songs – several of them arranged by Mark Kieswetter, who also plays keyboards on the album – feel fresh. Standout tracks for me are his arrangement of I Say a Little Prayer and Fleming’s arrangement of The Look of Love. The latter has a Gene Peurling-esque vocal accompaniment with the stunning voices of Suba Sankaran, Dylan Bell and Tom Lillington (who, along with Fleming, make up the a cappella singing group The Hampton Four). Peter Mueller’s searing guitar solo on Anyone Who Had a Heart adds to the epic rock ballad feel of the piece. The more laid-back (from the original), slightly bossa-ish feel of Promises, Promises is enhanced by percussion from Art Avalos and Ted Quinlan’s lovely nylon-string guitar playing. All in all this is a finely crafted album with a lot of heart and sensitive, solid work from everyone involved.