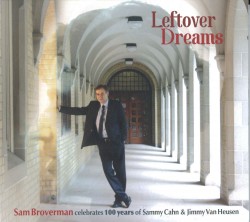 Astonishingly, it has been more than 100 years since the 1913 births of two of the most seminal and prolific film, stage and popular music composer/lyricists of the modern era – Sammy Cahn and Jimmy Van Heusen. Although in their later careers these two geniuses collaborated with other notables, their partnership yielded 11 Academy Award nominations and three Oscars. In Leftover Dreams, gifted and expressive vocalist Sam Broverman has presented a sumptuous buffet drawn from the work of Cahn and Van Heusen – carefully selecting not only their more familiar and beloved compositions, but also rarely performed gems including the poignant All My Tomorrows (a stunner) and the buoyant It Could Happen to You.

This well-produced recording is an immensely satisfying musical assemblage, and features a first-call jazz trio, including Mark Kieswetter on piano, producer and musical director Jordan O’Connor on bass and Ernesto Cervini on drums. Certainly one of the most moving and sumptuously arranged songs is Van Heusen’s and Johnny Mercer’s Empty Tables. In the annals of Hollywood legend, Mercer and Judy Garland carried on a long-term love affair (unbeknownst to their respective spouses). The two remained close for the duration of Garland’s life, and she actually passed away only a couple of years before Empty Tables was composed. The ballad is said to reflect Mercer’s deep feelings of grief and loss.

Another stand-out is A Sammy Cahn Song – an original composition by Broverman, whose silky smooth, pitch-perfect baritone is the ideal expression for these superb and timeless compositions. 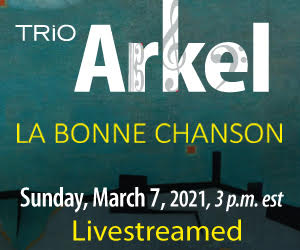