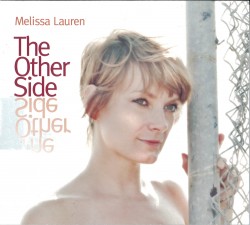 The Other Side
Melissa Lauren
Independent ML1111 (www.melissalaurenmusic.ca)

Singer-songwriter Melissa Lauren has been a part of the Toronto music community for a few years now, but with her sophomore release, The Other Side, she’s really making her mark. Lauren has a beguiling voice that mixes sweet playfulness with solid technique, control and range. Which would be plenty, but on top of that she has songwriting abilities that put her in another category from the legion of lovely crooners who enlist others’ work to tell their musical story. Harmonically speaking, Lauren’s songwriting doesn’t push a whole lot of boundaries, and she’s got a clever way with words that goes enough beyond cute to make things interesting without getting overly heavy. All of which suits the breezy, jazzy air of the album. The dozen songs each have a whiff of a bygone era hovering somewhere between the 1930s and the 60s, without being too derivative of any time or genre. So we get a bit of Mancini-esque cool on the opening Art Class, a touch of twangy longing on Somehow, a slightly Eastern European edge to Your Fool and an old tyme rollick from the title track. It all adds up to a special sound, much of the credit for which should be shared with guitarist Nathan Hiltz who is the main instrumental support and negotiates the shifts in style with taste and personality that never overwhelms. The rhythm section is ably rounded out by Ernesto Cervini on drums and Ross MacIntyre on bass. Lauren’s CD release event is March 1 at The Rex in Toronto. Check melissalaurenmusic.ca for details.