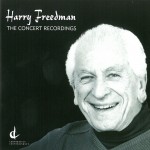 I was thrilled to receive the latest shipment of Centrediscs from the Canadian Music Centre (CMC) shortly after filing my February column and several days before that month’s issue hit the streets. I knew exactly what would take pride of place in my March column: Harry Freedman – The Concert Recordings (CMCCD 23517). I was therefore a little dismayed when I did see the February WholeNote and found that David Jaeger had stolen my thunder. His excellent and extended article about Freedman’s orchestral music and the particular pieces included on the disc, from his perspective as producer of a number of those recordings, would seemingly make anything I had to say redundant. But perhaps not irrelevant. In my own years as a broadcaster (at CKLN and CJRT) I met Freedman on a number of occasions and got to know him fairly well, but it is his music that made a real impression on me. In my formative years this was the music, particularly Freedman’s orchestral works, that I grew up understanding to define what made Canadian music Canadian: aural landscapes reminiscent of the North, stark and angular, crisp and rugged, but at the same time lush and evocative.

All of the tracks are exceptional, but there are two real standouts for me. Borealis for orchestra (TSO) and a (heavenly) host of choirs (Danish National Radio Choir, Elmer Iseler Singers, Swedish Radio Choir and Toronto Children’s Chorus) was written for and performed in the towering Barbara Frum Atrium in the CBC Broadcast Centre as part of Soundstreams’ Northern Encounters Festival of the Arts in 1997 with the orchestra and choirs surrounding the ground floor audience from the balconies above. Images predates Borealis by almost four decades (1960) and is heard here in a 1979 performance with Sir Andrew Davis at the helm of the TSO. It is a three-movement work inspired by Canadian artists Lawren Harris, Kazuo Nakamura and Jean-Pierre Riopelle which in the words of the composer is “not so much concerned with the content of the paintings as with their design…in effect, a translation into musical terms of the artists’ styles.”

As a reflection of that aspect of the CMC’s mandate to preserve and promote the history of our musical heritage, I feel this is one of the most significant releases from Centrediscs’ in recent years and as we enter Canada’s sesquicentennial an important reminder of our artistic heritage.

The other disc in the shipment from the CMC has left me scratching my head. I understand that an important part of the CMC’s mandate is to promote the music of our emerging composers and to reflect changing concerns and aesthetics, but I would still expect that to be done within the context of art music. Ravens (CMCCD 23217) features the music of Yellowknife-based composer Carmen Braden and it is a truly eclectic recording that would, I feel, be most at home in The WholeNote’s Pot Pourri section. Please don’t get me wrong, I like the disc very much and there are indeed some “classical” compositions included – a brief excerpt from Candle Ice for piano trio and field recordings of melting ice; Magnetic North for violin and piano; and Waltz of Wing and Claw “a string quartet of ravens playing in the wind” which turns out to be another excerpt from a larger work The Raven Conspiracy – but the bulk of the album consists of quirky and clever pop songs with occasional nods to jazz (à la Joni Mitchell) and even a twangy ode – Small Town Song – explained in the composer’s notes with the statement “The banjo is wonderful, but it scares me a little.” Braden seems to have overcome her fear of this predominantly southern instrument and this rousing sing-along brings an intriguing northern journey to a satisfying end. I just wish we could have heard the instrumental compositions in their entirety.

Another truly eclectic disc has come to my attention in the context of an upcoming Toronto performance. Vocalist and songwriter Simrit was born in Athens, Greece, but adopted and brought up in South Carolina by Greek immigrants. Her music draws on the Greek Orthodox chants of her heritage and on the pulse and melodic sensibilities of West African traditions which she has studied intensely. Add to this such influences as Mazzy Star, Jeff Buckley, Loreena McKennitt, roots reggae and world music from the Mediterranean to the Subcontinent and I’m not sure quite what you get, but I’ve been captivated by its compelling ambience for several weeks now.

As well as her haunting vocals, on Songs of Resilience (simritkaurmusic.com) Simrit plays harmonium and mellotron and is accompanied by a septet who between them play kora, pueblo log drums, congas, cello, electronics, electric and acoustic guitars, drum kit and miscellaneous percussion. Simrit says “This music changes consciousness, and that is where we can start. For the world to shift into a potentially peaceful place, we must start with ourselves first.” But as the press release assures us “the central message is not sappy or facile. It’s about finding the sounds to aid change, to expand what you can see and embrace.”

Concert note: You can find out what Simrit’s music and message is all about at St. George’s Lutheran Church at 410 College St. in Toronto on March 29 at 7:30.

Sticking with my Pot Pourri theme, I had the pleasure of meeting up with a friend from my early childhood at Winterfolk on the Family Day Weekend. David Storey and I knew each other back in our pre-school days, attending the same Anglican church and each other’s birthday parties. Somewhere around our teenage years we lost track of each other as he went off to choir school and I attended York County’s experiment with open plan education in the early years of Thornlea Secondary School. Evidently Storey spent some years as a singer-songwriter before taking a 25-year hiatus to direct television and film productions, including the iconic Corner Gas. When this last had run its course, Storey returned to his first love, playing the guitar and turning some wonderful stories into song.

He recently released his first full-length CD Coming Home (davidstoreymusic.com) and the name is particularly apt. The songs tell tales (tall and otherwise) of his life and adventures and although they are complete in themselves it was a treat to hear some of their background in intros and asides during his performance at the Black Swan on the Danforth, the central venue of Winterfolk. Performing with Lawrie Ingles (keyboard), Henry Lees (harmony vocals) and Bob Cohen (bass and something that seemed to be an eight-string ukulele, a new one on me) Storey was able to recreate a bare-bones version of the arrangements from the album, with Ingles providing some convincing fiddle lines on his electronic keyboard and adding a third voice to some tight harmonies. Cohen shone with fluid solos on two cover tunes, Little Feat’s Willin’ and Van Morrison’s Crazy Love but the rest of the hour-long set was devoted to original material from the CD.

All in all it was a lovely outing with my mother, who was once Storey’s Sunday-school teacher, and if you missed it – there was a good crowd, but I didn’t see you there – you should check out the album. Highlights for me include Saint Adelaide (Who knew there was a Catholic saint of abuse victims; brides; empresses; exiles; in-law problems; parenthood; parents of large families; princesses; prisoners; second marriages; step-parents; and widows? She must be very busy!); the cancer survivor’s anthem Crusty – “I’m crusty and I’m chuff [look it up if you need to, this is a great word!], and I refuse to die, I’m gonna stare this crazy world straight in the eye…” and Last Loon on the Lake where Storey is joined by the bluegrass band Traditionally Wound. You really owe it to yourself to visit the website to hear this track (and then buy the CD or download).

Lest it seem that I have spent most of my time this month awash in Pot Pourri, I’ll mention that I have been practising my cello diligently for the upcoming term-end recital at University Settlement Music and Arts School (March 3 at 7pm at the Church of St. George the Martyr). This time around I am playing in two string trios and immersing myself in the music of Johann Sebastian Bach. My regular group will play selected movements of Dmitry Sitkovetsky’s arrangement of the Goldberg Variations and I managed to talk my way into another which will be doing a trio arrangement of the Concerto for Two Violins in D Minor BWV1043. So it’s been quite a challenging couple of months preparing and “I’m playing as fast as I can!” An initial frustration as I sought out recordings to study was that current day period orchestras tune substantially lower than the modern concert pitch of A440 making playing along impractical unless I want to retune my cello each time. Fortunately I found that my old trusty Columbia LP recording with Isaac Stern and Itzhak Perlman and the New York Philharmonic under Zubin Mehta was indeed at modern pitch and so all I had to do was aspire to their tempos…

Elsewhere in these pages you can read Bruce Surtees’ impressions of The David Oistrakh Edition which includes among a host of other recordings David and son Igor playing works for two violins by Bach and Vivaldi. It was a great pleasure to find in my inbox just two days before I sat down to write this, a new Berlin Classics reissue of the Bach Concerto for Two Violins BWV 1043 and the Vivaldi Concerto Grosso Op.3 No.8 with David and Igor Oistrach [sic] (010084BC) remastered from 1957 Eterna mono recordings. So now I have two fabulous models to work from (both at A440) and the Berlin Classics recording comes with the added bonus of one of my very favourite violin pieces, the Franck Violin Sonata in A Major featuring David Oistrakh and Anton Ginsburg (piano) from 1958. I must admit that it was a relief to find that without losing any of the bright and lively feel of the outer movements, the Oistrakhs take slightly more relaxed tempos than Stern and Perlman, leaving me with the hope that in the next two weeks I can actually get up to speed after all. On both recordings the gorgeous Largo middle movement is to die for.

We welcome your feedback and invite submissions. CDs and comments should be sent to: DISCoveries, WholeNote Media Inc., The Centre for Social Innovation, 503 – 720 Bathurst St. Toronto ON M5S 2R4. We also encourage you to visit our website
thewholenote.com where you can find enhanced reviews in the Listening Room with audio samples, upcoming performance details and direct links to performers, composers and record labels.