Through my association with New Music Concerts I had the pleasure and privilege of meeting the iconic American composer Elliott Carter on a number of occasions, most recently in May 2006 when we presented two concerts under the banner “Elliott Carter, Double Portrait.” It was therefore with personal sadness that I noted Mr. Carter’s death last month, just weeks before his 104th birthday. While of course his passing was inevitable, we had somehow come to think that he just might go on composing forever – he was active right up until the last month of his life. 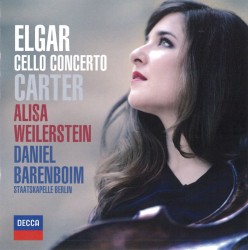 I’m sure it was a coincidence, but nevertheless it came as some consolation to receive a new recording of Carter’s 2000 Cello Concerto just days after the sad news. Elgar, Carter: Cello Concertos marks the Decca debut for Alisa Weilerstein, recorded here with the Staatskapelle Berlin under Daniel Barenboim (B0017592-02). Weilerstein was one of the recipients of the so-called “Genius” award, worth $250,000 over five years, from the MacArthur Foundation in 2011, one of very few musicians to have ever been so honoured. The extensive liner notes by Helen Wallace draw on Weilerstein’s personal impressions of the pieces and her relationship with them, which in the case of the Elgar stretches back to the age of seven or eight when she first heard Jacqueline du Pré’s historic recording. Her performance is wonderfully robust and in some ways charmingly old-fashioned with an occasional swooping portamento and large romantic sound. Barenboim initiated this project and we can only wonder about his mixed feelings as we realize that this young woman may well have inherited the mantle of the late du Pré who was his wife for the last 20 years of her life.

Weilerstein’s approach to the Carter Concerto is thoroughly modern, with spot-on intonation and crisp attacks. Evidently she “played and discussed with the vivacious 104-(sic) year-old composer” and I believe it shows in her interpretation. The piece was commissioned by the Chicago Symphony for cellist Yo-Yo Ma who premiered the work in 2001 but has yet to record it. There is one previous recording featuring frequent Carter collaborator Fred Sherry on the Bridge label (9184) but it is great to have this new performance in a more mainstream context that will bring the work much well-deserved attention. Carter shows his brilliance as an orchestrator throughout with a transparency that never overshadows the cello, dynamic tutti interjections notwithstanding. Of particular note are passages with the bass clarinet and (contra?) bassoon accompanying the cello in its singing upper register. In a day and age when some composers request the soloist be amplified to better hold their own against the forces of the modern symphony orchestra, Carter shows there is no need for this when the balance is skilfully managed. The disc is rounded out by a very moving performance of Max Bruch’s Kol Nidrei. 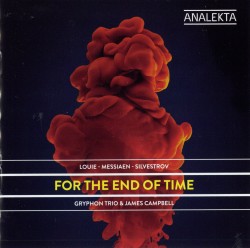 In recent months I have mentioned a number of recordings of music by Elliott Carter’s coeval Olivier Messiaen (born one day before Carter on December 10, 1908) and I’m pleased to say there is a new local release that is a welcome addition to the catalogue. For the End of Time (Analekta AN 2 9861) features the Gryphon Trio and clarinettist James Campbell performing, as might be expected, Messiaen’s famous Quatuor pour la fin du temps. What is surprising is the context in which it is presented. The disc opens with Echoes of Time, a ten-minute work by Alexina Louie inspired by the Messiaen which she calls “the greatest piece for chamber ensemble that’s possibly ever been written.” It is intended as an introduction to an evening’s entertainment that will include a 40-minute play about Messiaen’s creation of the work as a German prisoner of war (it was first performed in a prison camp in Silesia in 1941) by London-based playwright Mieczysława Wazacz with incidental music by Louie and will culminate with a performance of the Quatuor. Evidently the production will eventually become part of the trio’s touring repertoire. I hope that Toronto audiences will have an opportunity to experience what promises to be an enlightening and moving performance in the near future.

But back to the recording at hand. Louie’s piece does indeed include echoes from its progenitor, but not in an imitative way. There are textures and timbres that are reminiscent of the original, but Louie has obviously absorbed the music thoroughly and it re-emerges in her own voice. Here and throughout the Messiaen, from the quietest entries to the ebullient birdcalls, Campbell’s clarinet melds seamlessly with Annalee Patipatanakoon’s sweet violin, Roman Borys’ rich cello and the tintinnabulations of Jamie Parker’s piano.

There is no shortage of great recordings of the Quatuor pour la fin du temps, including another fabulous local contender on the Naxos label (8.554824) featuring the Amici Ensemble and Scott St. John, but as far as I’m concerned, the more the merrier. To paraphrase Daniel Foley from his “Too Much Mahler?” article further on in these pages, there can never be enough Messiaen for me.

I have mixed feelings about the inclusion of the final selection on the disc however, Valentin Sylvestrov’s Fugitive Visions of Mozart. Commissioned by the Gryphon Trio in 2007, I can understand why they wanted to record it, but when I first heard it following directly on the Messiaen it just seemed like so much bomboniere. It is a lovely piece, and after repeated listenings I have come around and quite enjoy hearing it separately, but I still feel that the context is wrong. We don’t need dessert after such an exhausting main course. Thank goodness CD players are programmable. 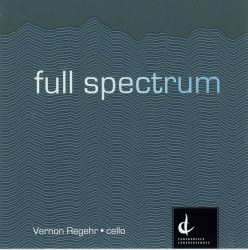 Another thing that I can’t seem to get enough of is good cello discs. Full Spectrum (CMCCD 18112) is one of a recent spate of new recordings on the Centrediscs label and it features cellist Vernon Regehr.The Winnipeg native did his undergraduate work in Toronto at the Royal Conservatory, went on to obtain masters and doctoral degrees at Stony Brook and now teaches at Memorial University. He has obviously cultivated an interest in contemporary and specifically Canadian repertoire and this solo disc is real gem. Beginning with Larysa Kuzmenko’s extended Fantasy for Solo Cello from 2009 we are immediately drawn in to a lush and emotionally charged landscape with soaring lines and rich bass passages. As the work unfolds over the next quarter hour we are transported through intense drama and moments of quiet introspection. The final movement bursts forth with toccata-like precision and keeps it up with only momentary respites along the way to a wonderfully executed bravura ending.

The delicate opening of Matthew Whittall’s From the Edge of Mist with its use of harmonics quickly heralds us into another kind of soundworld, with ethereal passages and drones. Different again is the angular and abrasive opening of Stigmata by Vincent Ho. This gradually gives way to more contemplative “moments of loneliness and desolation” but always with a hard edge. Clark Winslow Ross’ Lamentations lives up to its name and we hear the cantorial voice of the cello alternating with high wailing lines and wonderfully warm pizzicato passages. Interlude I by François-Hughes Leclair explores the deep and resonant range of the cello in its opening passage and then overlays a high melody upon the drone of the lower strings. Interlude II centres around an ostinato bass line with occasional melodic interruptions. Kati Agócs’ Versprechen, composed when she was studying with Milton Babbitt, applies 12-note techniques to Bach’s harmonization of the Lutheran chorale God is my shield and helper. What begins in the realm of academe gradually sheds its serial trappings and in the end we are left with a simple and beautiful rendition of Bach’s original.

As the title suggests, through his choice of repertoire Regehr presents us with a full spectrum of the cello’s natural sound capabilities. Admittedly there are no extra-musical extended techniques employed (bowing on the tail piece or scraping the body of the instrument for instance) and no microtonal playing involved, but within the traditional range of the instrument we are taken to its outer limits, with Regehr a very able guide. 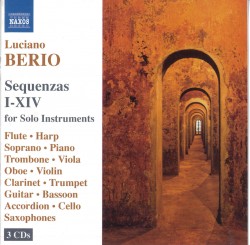 There is a Naxos recording that dates from 2006 that I’d like to mention. New Music Concerts’ first event back in January 1972 featured the music of Luciano Berio and for months in advance there were cryptic announcements in the press simply stating “Berio is coming.” Elsewhere in these pages you will find an article by Paula Citron about a marathon performance coming up in January at the Faculty of Music at U of T featuring the complete Sequenzas by that seminal Italian composer. This cycle of solo works spans more than four decades ofBerio’s output beginning in 1958 with Sequenza I for flute(to be performed by Robert Aitken) and ending in 2002, the year before the composer’s death, with Sequenza XIV for cello(to be performed by David Hetherington). The in-between works will be performed by a host of Toronto’s finest musicians including Joseph Petric (accordion), Guy Few (trumpet), Wallace Halladay (saxophone), Xin Wang (soprano), Sanya Eng (harp) and Adam Sherkin (piano). The Naxos recording (8.557661-63) features some of these same players (Petric, Few and Halladay) and other local notables (Nora Shulman, Erica Goodman, Steven Dann, Jasper Wood and Joaquin Valdepeñas to name a few). While all of these works were written for specific performers (Severino Gazzelloni, Cathy Berberian, Heinz Holliger, Rohan de Saram, etc.) and many have been recorded individually by the dedicatees, this is a comprehensive collection of all 14 (and includes variants of number seven and number nine as well) in very convincing performances. Listening to this set would be a good way to prepare for the upcoming marathon.

Editor’s Corner continues with more Elliott Carter on the website. 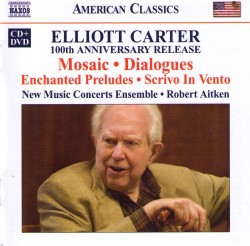 Having declared my involvement with New Music Concerts (I have been its general manager for more than a decade), I hope you won’t mind if I draw your attention to our Naxos recording Elliott Carter – 100th Anniversary Release (8.559614). It features performances recorded at the two concerts mentioned above during Carter’s last visit to Toronto in 2006 and was released two years later on the occasion of his centenary. There are a variety of solo works spanning 1984 through 2001 performed by Robert Aitken, Fujiko Imajishi, David Hetherington, Max Christie and Carter’s associate Virgil Blackwell, and more recent concertante works featuring Erica Goodman, David Swan and the New Music Concerts Ensemble under Robert Aitken’s direction. The package includes a separate DVD of Carter in conversation with Aitken from the stage of Glenn Gould Studio and video of the performances of the concerted works Mosaic and Dialogues. It provides a welcome reminder of the musical genius and sparkling good humour of this wonderful human being. He will be sorely missed.

We welcome your feedback and invite submissions. CDs and comments should be sent to: The WholeNote, 503 – 720 Bathurst St. Toronto, ON M5S 2R4.