The big news this month is the launch of Tafelmusik Media, a new initiative which will include CDs and DVDs, a digital concert hall and internet television productions, all under the auspices of the Tafelmusik Baroque Orchestra and Chamber Choir. By launching its own record label Tafelmusik is taking charge not only of its back catalogue, re-releasing the best of previous Sony and CBC recordings, but also its march into the digital future. This month sees the release of a DVD+CD set of the stunning multi-media Galileo Project (TMK1001DVDCD) conceived and programmed by Alison Mackay, along with re-issues of the 1995 JUNO award winning Bach Brandenburg Concertos (TMK1004CD2) and the critically acclaimed Vivaldi Four Seasons (TMK1007CD) both originally released by Sony.

Having already enjoyed these recordings for years, as is the case for many Tafelmusik fans I’m sure, for me it is the new material that is of most interest. If the production values on the Galileo Project are any indication, there are good things in store indeed. Upcoming projects include Beethoven’s “Eroica” symphony and a full-length audio recording of Handel’s Messiah. As a precursor to this, a DVD of a live “Sing Along” performance of Messiah is scheduled for release in April. Tafelmusik has also launched a new “Watch and Listen” section on its website www.tafelmusik.org where you can find a host of streaming videos and full details of the label’s developments, including highlights of Alison Mackay’s latest extravaganza, House of Dreams, which premiered in Banff and Toronto last month and which Tafelmusik is currently touring in the U.S.A.

Other news of course includes the announcement of the 2012 JUNO nominations. A week of festivities will take place in Ottawa this year, culminating with the April 1 awards ceremony broadcast. You can visit WholeNote columnist Ori Dagan’s blog at www.thewholenote.com for a full list of nominees in the categories relevant to our magazine and links to the reviews of these discs which have appeared here over the past year. With Robert Tomas’ enthusiastic assessment of Marie-Josée Lord’s debut CD, Daniel Foley’s “the home team wins” review of Yannick Nézet-Séguin’s Bruckner Fourth and Allan Pulker’s appreciation of Susan Hoeppner’s American Flute Masterpieces to be found further on in these pages, I’m pleased to note that we have reviewed all but one of the 20 contenders in the classical categories. And that missing one? I will rectify that right now. The Saint John String Quartet’s latest recording, Saint John String Quartet & Jacques Dupriez (www.sjsq.ca) includes one of the five nominated works in the Best Classical Composition category, String Quartet No.2 Op.50, written in 1991 by the late Jacques Hétu. Hétu (1938-2010) was perhaps the foremost “Romantic” composer of his generation and although his music always showed strong ties to the past there was an innate modernity to his language that belied any sense of anachronism. The second string quartet is an apt example of this in his mature style. The dark and sombre opening movement, with viola lines that almost sound like an oboe, is haunting. This gives way to a rhythmic scherzo somewhat reminiscent of Shostakovich. The finale returns to the lush and pensive mood of the opening movement and sustains this sense of introspection to the quartet’s end. The other works on the disc include Brahms’ Quintet in B Minor Op.115, written exactly one hundred years before the Hétu, and a mid-20th century string quartet by Belgian composer Flor Alpaerts. It is a nicely balance programme, with Hétu’s quartet growing seamlessly out of the Brahms and the sunny opening of the Alpaerts, with its more complex but still quite tonal palette, providing relief from the doleful music that comes before.

Of special note in the Brahms is the use of a baritone violin in place of the original clarinet. This rare 18th century instrument, which fell out of favour due to its large size, is tuned an octave below the violin – halfway between viola and cello – and has a dark tone particularly well suited to this repertoire. Paganini, who had exceptionally large hands, was evidently the last major champion of the baritone violin and it is thanks to Jacques Dupriez that the instrument has come to light again in modern times.

A highlight of my listening this past month has been an ebullient two piano recording by local artists Attila Fias (www.attilafias.com) and John Kameel Farah (www.johnfarah.com). Pieces of the Earth (AFJKF-01) was recorded at the Music Gallery last year and intersperses four formal compositions by each composer with brief, often playful improvised interludes. The disc opens in full minimalist fashion with a lively piece entitled Fluttering by Fias. This motoric romp sets the pace for the bulk of this presentation, but there are moments of contemplation such as Farah’s My Parents’ Garden with its quiet jazzy treatment of some Messiaen-like harmonies, and of foreboding in Warning and Plumes, two works that consider the devastation that oil spills wreak on our oceans. These two accomplished artists have been collaborating for a number of years and it shows, especially in the spontaneous improvised bridges between the composed works. With technical abilities to spare, Fias and Farah delight us with virtuosic panache and thoughtful musicality.

The following discs caught my eye as a result of my activities as general manager of Toronto’s New Music Concerts. 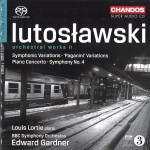 Next year will be the centenary of one of the giants of 20th century composition, Witold Lutosławski, and I am sure there will be a wealth of recordings to mark the occasion. Chandos may well be first out of the gate with Muzyka Polska Volume Three featuring the BBC Symphony Orchestra performing works of Lutosławski under the direction of Edward Gardner (CHSA 5098). Subtitled “Orchestral Works II” the disc spans the entirety of Lutosławski’s creative life from the early Symphonic Variations, completed at the age of 25, to the Symphony No.4, one of the very last works he would finish before his death in 1994. Of particular interest are the works with piano performed by Louis Lortie and once again covering a broad timeframe. The Concerto for Piano and Orchestra, completed in 1988, is a prime example of the composer’s mature style. We hear the piano gradually rising up out of a primordial ooze of squealing wind instruments and muted strings to eventually dominate the landscape. Variations on a Theme of Paganini, on the other hand, is much more traditional, orchestrated by the composer in 1978 from a virtuosic work composed for two pianos in 1941. “Paganini Variations” has become a classic of the genre and is one of Lutosławski’s most performed works (along with the Concerto for Orchestra). It is the late symphony however that is the crowning jewel of this collection. Once again we begin in near silence, but this time it is a haunting clarinet, followed by flute and then a brief trumpet fanfare that leads us toward the light. On a local note, another work dating from these final years, Chantefleurs et Chantefables (not included here), was part of the last concert Lutosławski ever conducted. This took place in Toronto in 1993 at the Premiere Dance Theatre, Harbourfront, presented by New Music Concerts, featuring soprano Valdine Anderson and violinist Fujiko Imajishi. That historic performance is available on the Naxos release Lutosławski’s Last Concert (8.572450). 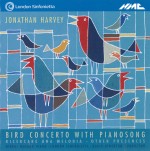 Another work with near-local connections is the Bird Concerto with Piano Song written in 2001-3 by Jonathan Harvey in homage to Olivier Messiaen. I say “near-local” because the poor health of the composer forced the cancellation, back in March 2010, of a residency at the University of Toronto Faculty of Music and a planned performance by New Music Concerts with guest pianist Hideki Nagano. Fortunately there is a new recording by the London Sinfonietta of this extended and eccentric work featuring Nagano on the British NMC label (NMC D177). The bird songs of the title are programmed into an electronic keyboard, controlled by the soloist, which is piggy-backed on the grand piano. Some of the sounds seem convincingly authentic, but most are distinctly synthetic and only suggestive of the avian world. The orchestration is for large ensemble, single winds and strings, but calls for some unusually low instruments including contra-bassoon and contra-bass clarinet. This is a live performance from the Warsaw Autumn Festival of 2009 conducted by David Atherton and it gives Toronto audiences a chance to hear what they missed. Harvey is well known as a pioneer in the field of live electronics and the disc also includes works for solo oboe, trumpet and cello with interactive media.

We welcome your feedback and invite submissions. CDs and comments should be sent to: The WholeNote, 503 – 720 Bathurst St. Toronto ON M5S 2R4. We also encourage you to visit our website www.thewholenote.com where you can find added features including direct links to performers, composers and record labels, “buy buttons” for on-line shopping and additional, expanded and archival reviews.