By my reckoning, the Canadian Music Centre released more than a dozen CDs on its Centrediscs label last year, with reviews of 13 titles appearing in these pages since July 2010. This is, by any standard, a remarkable achievement in the rarefied medium of contemporary concert music and wonderful news for the composers of this country. Even better news is that the field has broadened with the recent announcement from NAXOS – the largest producer of classical CDs in the world – that they will be releasing six to eight discs of music by Canadian composers annually on their new Canadian Classics series.

The first to appear is Fugitive Colours, featuring music by Jeffrey Ryan performed by the Vancouver Symphony Orchestra and the Gryphon Trio under the direction of Bramwell Tovey (8.572765). There is a strong Toronto connection here in spite of the Vancouver by-line. Born in Toronto (and raised in Fergus), Ryan has since 1997(!) served as composer advisor to Music Toronto - his String Quartet No. 4 “Inspirare” was premiered by the Tokyo Quartet at Walter Hall in the opening concert of MT’s 40th season last month - and from 2000-2002 was an affiliate composer of the Toronto Symphony Orchestra. Now based in Vancouver, Ryan was composer laureate of the Vancouver Symphony Orchestra in 2008/09 having previously served as its composer-in-residence from 2002-2007.

The three works on this CD are a legacy of his relationship with the VSO. The opener, The Linearity of Light¸ commissioned in the early days of his residency there, was completed in 2003. It is a tone poem that explores reflections and refractions in a dramatic and rhythmically compelling way, at times reminiscent of Stravinsky and Holst, juxtaposed with ethereal moments of extreme delicacy. 2007’s Equilateral: Triple Concerto for Piano Trio and Orchestra was co-commissioned by the VSO and the TSO in celebration of the 15th anniversary of the Gryphon Trio, long-time colleagues of Ryan’s at Music Toronto as ensemble-in-residence. It must have been a daunting task to undertake a work in the shadow of Beethoven’s masterpiece for the same instrumentation – I can’t think of another example off-hand; I’ll probably get letters – but Ryan rises to the challenge admirably. The two outer movements, aptly named Breathless and Serpentine featuring unison rhythms and dense textures, frame the wonderfully lyrical Points of Contact, with its poignant solo passages and microtonal “Doppler” effects. Ryan the colourist is shown to great effect in the title work, the 2006 symphony commissioned by the VSO. Three of the movements make no secret of their inspiration from the world of colour: Intarsia (although I must admit I had to look that one up), Nocturne (Magenta) and Viridian. The remaining (third) movement, Light: Fast suggests the full spectrum while once again reminding us of the rhythmic vitality of Stravinsky. This segues into the finale with a violin solo which sets the tone for an extended and peaceful dénouement.

All in all, this disc makes a strong contribution to the recorded legacy of Canadian music and a fitting opening to the Naxos series. Ryan already had an impressive discography – this is the tenth CD to include his music – but here we are presented with the first to feature his orchestral music exclusively. Congratulations to Jeffrey Ryan, to Naxos and indeed to the Canadian music community – this series promises to be a win, win, win situation.

Concert note: Jeffrey Ryan’s extended vocal cycle The Whitening of the Ox will receive its premiere at the Enwave Theatre on January 29 with baritone Tyler Duncan and the New Music Concerts ensemble. 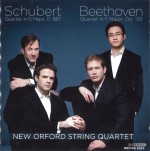 The rest of my listening this month was devoted to recent releases in my favourite genre, the string quartet. I was intrigued to receive a disc on the Bridge Records label purporting to be by the New Orford String Quartet. Who can this be, I wondered, with the nerve to appropriate the name of Canada’s most respected chamber ensemble? I still harbour some of those thoughts, but having listened to the Schubert and Beethoven quartets included on their inaugural release (Bridge 9363) I am willing to at least grant them credibility. It turns out that the quartet, like its namesake, was formed at the Orford Music Centre in Quebec, in this instance in the summer of 2009. It is comprised of principals and former principals of the Orchestre Symphonique de Montréal and the Toronto Symphony, violinists Jonathan Crow and Andrew Wan, violist Eric Nowlin and cellist Brian Manker. Unlike the original Orford which for more than 25 years was devoted exclusively to being a quartet, the New Orford dedicates only specific periods each year to working together. There are a number of surprises on this recording: that the Bridge label doesn’t only record the music of living American composers and musicians; that Schubert, Beethoven’s junior by 27 years, finished his 15th string quartet in the same year that Beethoven wrote his own 16th (the two being paired on this recording); and that a “part-time” quartet can play so well together! The disc features unusual and insightful liner notes by cellist Brian Manker and the exceptional sound quality was captured at the Schulich School of Music, McGill. 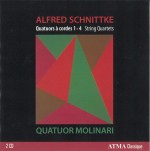 Founded in 1997, Montreal’s Molinari Quartet has established a solid reputation as a voice for established and emerging composers working in the genre of the string quartet. One of its lasting legacies is the triennial Molinari Quartet International Competition for Composition which in the fist 10 years has received over 600 new quartet scores from 60 countries. The only remaining founding member, first violinist Olga Ranzenhofer, has surrounded herself with a fine crop of new partners – violinist Frédéric Bednarz, violist Frédéric Lambert and cellist Pierre-Alain Bouvrette – for a 2 CD set of string quartets by Alfred Schnittke (ATMA ACD2 2634). The German/Russian composer (1934-1998) was one of the original voices of the new eclecticism and this is well demonstrated in his four quartets spanning the years 1966 to 1983. These important works receive convincing performances here. My only qualm is the ordering of the quartets on the recording. Usually re-arranging works is a result of the time constraints of the medium. That is obviously not the case in this instance (3-1-2 on one disc) so we assume it was an aesthetic choice, perhaps to do with the particularly alluring opening of the third quartet. That quibble aside I find it very easy to recommend this set to both those who are familiar with the material and those who have not yet encountered the quartets of this exceptional composer. 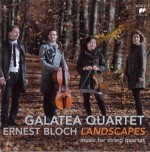 My first exposure to the music of Swiss/Israeli composer Ernest Bloch was a rehearsal I had the privilege of attending in my formative years when Milton Barnes was conducting the Hart House Chamber Orchestra in a performance of Bloch’s Concerto Grosso No. 2. That piece still numbers among my favourites and so it was a great pleasure to receive the Galatea Quartet’s recent recording Landscapes (SONY 88697950242) which features a number of Bloch’s shorter works for string quartet, some of which are reminiscent of the concerto grosso, and an adolescent work which he later disavowed. Bloch published five mature quartets, not included here, and perhaps it was with good reason that he did not acknowledge this student work composed when he was fifteen. But I find it charming. It is not embroiled in the romantic turmoil of the time when it was written (1895) but is rather a clean and refreshing expression of exuberance and youthful optimism. The work is as yet unpublished. I thank the Galatea for bringing it to the world’s attention and look forward to the time when I can have a go at it with my own amateur quartet.

We welcome your feedback and invite submissions. CDs and comments should be sent to: The WholeNote, 503 – 720 Bathurst St. Toronto ON M5S 2R4. 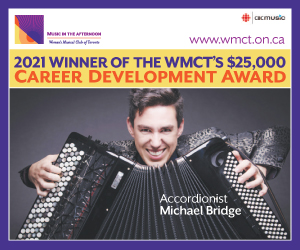