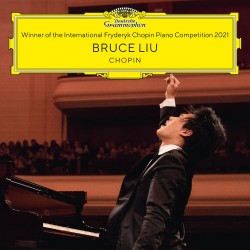 One of the few silver linings to arise out of this incessant pandemic has been the boundless, world-class music events made available (often for free) for livestreaming on a variety of platforms. Taking advantage of as many of these musical offerings as my Zoomed-out brain has allowed, one day last October I spent a few sublime hours on YouTube watching the livestream of the 2021 Chopin Piano Competition in Warsaw. I was enthralled, in particular, by Bruce Liu, who in fact, went on to become the first Canadian to win the prestigious competition!

Shortly thereafter, Deutsche Grammophon (DG) released this CD featuring live highlights of Liu’s solo performances from the competition’s various rounds. According to Liu, DG chose the playlist: the entire round one recital of two Etudes (Op.10 No.4; Op.25 No.4), a Nocturne (Op.27 No.1) and the fourth Scherzo; the Andante Spianato and Grand Polonaise Brillante, and a Waltz (Op.42) from the second round; the Op.33 Mazurkas and the Variations on “La ci darem la mano” from round three.

Rather than parse out bits and pieces from those performances, I wish to say this about Bruce Liu: the to-be-expected and breathtaking technical prowess aside, what sets Liu apart from the others is his risk-taking spontaneity. His interpretations are revelatory; his joy in playing, palpable. He is a sparkling, elegant and original virtuoso. A true sensation! 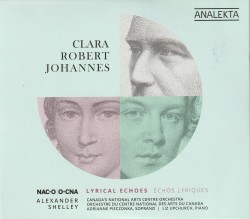 Is it by accident that the lead-in to the album title Lyrical Echoes begins with the name of Clara Schumann – ahead of her more celebrated peers, husband Robert and Johannes Brahms? Even if the avowed aim of the proposed four-part series is to show how “closely intertwined personal and artistic connections between the three musical giants” were, I prefer to think it as poetic justice.

Clara Schumann (nee Wieck) was one of the world’s leading pianists of her day, admired by Goethe, Mendelssohn, Paganini and others. As a young woman she was known for her inclination to melancholy. She was proclaimed wundermädchen by the Emperor of Austria and praised by Liszt for her “complete technical mastery, depth and sincerity of feeling.”

Indeed her songs here highlight the ravishing daintiness and poetic feeling of her work. Her skilful use of rhythm, harmony and pianistic colours raises these miniatures to the divine, with the lustrous soprano Adrianne Pieczonka and masterful pianist Liz Upchurch performing them with such a whispered intimacy that you feel almost like an eavesdropper throughout.

Robert Schumann was a genius in his own right, albeit feeling himself a failure throughout his life. The Symphony No.2 is the darkest work he ever wrote. In each section of this poetic work the National Arts Centre Orchestra soars under Alexander Shelley. The orchestra’s Brahms Symphony No.2 is refined and lustrous, capturing the composer’s epic vision as Shelley maintains its flow and noble grandeur. 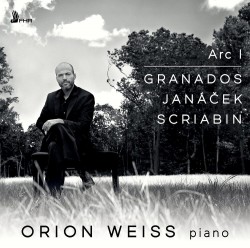 American pianist Orion Weiss delivers a powerful musical statement with his new album, ARC I: Granados, Janáček, Scriabin. Please note that I am using the term album, rather than recording. This is purposeful. Without generalizing, or hopefully sounding overly pedantic, much of what exists in both classical (and jazz) discographies are recordings; a sound capture of what, essentially, is a live musical event documented in such a way as to preserve and remember a concertizing moment in time. An album, conversely, has, at the very least, an extra musical purpose to it, cognizant of track order, narrative arc and overall presentation.

What Weiss has created, by connecting music written by Enrique Granados, Leoš Janáček and Alexander Scriabin (historically congruent, but stylistically and nationalistically disparate composers), through their zeitgeist-appropriate shared aesthetic of writing bleak, self-referential and globally aware music shortly before the world plunged into a devastating and worldwide war, is creative, programmatic and most definitely, album worthy.

As the first of three recordings in a projected ARC trilogy, Weiss here finds the commonalities of modernism, despair and haunting beauty that unites Granados’ Goyescas, Janáček’s In the Mists and Scriabin’s Piano Sonata No.9 “Black Mass,” mining historically prescient meaning from these pieces, as our world watches what seems likely to be an impending Russian invasion of Ukraine. Weiss’ album is beautifully played, captured with sonic elegance and presents an eerie programmatic message in musical form of what creatively was in the air between 1911 and 1913. The world should listen. Not only for the beauty of this recording, but for the message therein. 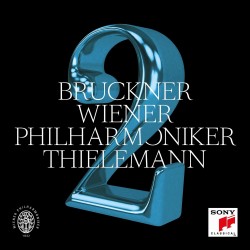 Bruckner is not everybody’s cup of tea. Some worship him and some outright despise him. And he is so easy to ridicule. He was a country bumpkin, a peasant. The funny story goes that he even gave a thaler to Hans Richter, his conductor, as a reward to buy himself a beer. His reputation was also hampered by the British critics calling his symphonies “boa constrictors” and so he had difficulties gaining acceptance in England or North America. Today however, his reputation has never been higher. His symphonies are a step-by-step progression towards an ultimate goal and the last three are works of a genius.

Due to the COVID pandemic all concert activities were stopped so Christian Thielemann, onetime assistant to Karajan, famous as general music director of the Bayreuth Festival and principal conductor of the Dresden Staatskapelle, decided to record all nine of Bruckner’s symphonies in a leisurely manner with plenty of time now being available. The Vienna Philharmonic was the obvious choice, since it was they who had premiered those works, and in the Musikvereinssaal with its legendary acoustics. This recording is part of that series.

After the turbulent, sturm und drang First Symphony, the Second is entirely different. It is notable as the first time Bruckner opens with a tremolo on the high strings pianissimo, which has been described as a “primeval mist” that Thielemann renders nearly inaudibly. From this tremolo a sinuous cello theme emerges which returns in many guises throughout as a leitmotiv. Another new idea is the so-called “Bruckner rhythm” of two beats followed by three that appears here for the first time.

Thielemann takes a relaxed approach, a slower tempo than some, so all the details come out beautifully and the climaxes are shattering. 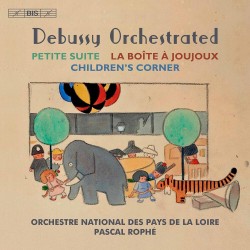 Who better than a French orchestra – in this case, the Orchestre National des Pays de la Loire conducted by Pascal Rophé – to pay homage to the music of Claude Debussy in this delightful recording on the BIS label? Two of the works here – the Petite Suite and the Children’s Corner Suite  were originally composed for piano and later orchestrated by Henri Büsser while the ballet scenario La Boîte à joujoux  (The Toy- Box) existed only in a piano version at the time of Debussy’s death in 1918, but was later orchestrated by his friend André Caplet.

The four-movement Petite Suite from 1899 was inspired by the “fêtes galantes” paintings of Watteau and Fragonard as portrayed in poems by Paul Verlaine. The suite may have originated from a request for music that would appeal to skilled amateurs, and its simplistic and affable style stands in contrast to the more progressive music Debussy was creating at the time.

Debussy adored his young daughter “Chou-Chou” and she was undoubtedly the inspiration for the ballet-scenario La Boîte à joujoux devised by writer André Hellé. The plot in this highly descriptive six-movement score revolves around three principle characters, and in the end, love triumphs over adversity. It was for Chou-Chou that Debussy composed the Children’s Corner Suite in 1908. More than 100 years later, the music continues to charm, with movements such as Serenade for the Doll, Jimbo’s Lullaby and The Snow is Dancing, a poignant and wistful glimpse of childhood in a more innocent age. Throughout, the ONPL delivers a polished and elegant performance, at all times thoughtfully nuanced. This is a fine recording of some familiar (and less-than-familiar) repertoire. Debussy – and quite probably Chou-Chou as well – would have heartily approved! 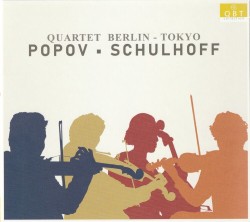 Prokofiev, Shostakovich, Khachaturian – in 1948, the USSR’s three leading composers were denounced as “formalists” by the Communist Party’s Central Committee, removed from official positions, many of their works banned. Now almost forgotten is that along with unspecified “others,” three less-celebrated composers were also named in the condemnation – Nikolai Myaskovsky, Vissarion Shebalin and Gavriil Popov. In the following years, the fearful composers tended to employ the folk-flavoured, patriotic or “optimistic” styles demanded by the authorities.

Included on this CD is Erwin Schulhoff’s tuneful, heavily rhythmic, 14-minute Five Pieces for String Quartet (1923). Each of these playful, satiric miniatures would make a superb concert encore piece. Superb, too, is the playing of the multi-award-winning Quartet Berlin-Tokyo. Bravi!

Listen to 'Popov: Schulhoff' Now in the Listening Room 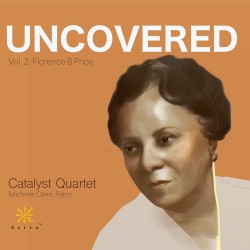 It is a proverbial travesty that we are “discovering” the work of an important Black composer – such as Florence B. Price – almost a hundred years after her career began. And that too, even as the music continuum has now been propelled into the 21st century. After all, it’s no secret that over three hundred years ago the it was a celebrated Black English violinist, George Bridgetower who, in 1803, performed Beethoven’s Violin Sonata No.9 in A Minor (Op.47) much to the composer’s delight.

A measure of how remarkable a recording this is is heard not only on Price’s re-invention of Negro Spirituals – such as Go Down Moses – in her elegant chamber works, Negro Folksongs in Counterpoint and Negro Folksongs for String Quartet. Even more remarkable is that five of these works are world premieres on this album that includes the Quartets and Quintets for Piano and Strings, which carry the heft of this recording.

The Catalyst penetrates the skins of these melodies and harmonies with deep passion and uncommon eloquence. The nobility of this music is quite beyond reproach. Each piece seems to speak to the musicians like a secret revealed from the heart. The Negro Folksongs in Counterpoint are bittersweet and often even exhilarating. This is a delicate, perfectly weighted performance by the Catalyst; a recording to die for. 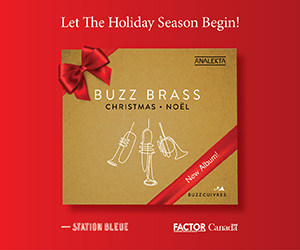