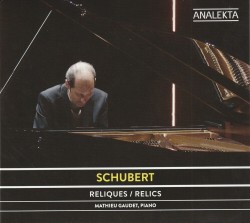 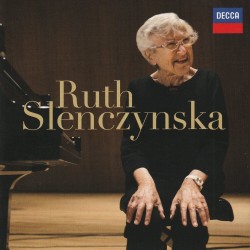 My Life In Music
Ruth Slenczynska
Decca B0035175-02 (deccaclassics.com/en)

Like it or not, success in the world of recorded music (classical, pop, jazz or otherwise) no longer, if it ever did, results exclusively from musical excellence. Rather, what is required is the coalescing of good music and a compelling backstory in order to command listener and record label attention. Though not a simple binary, examples abound, of course, of music more heavily weighted in one area, and not the other. There is the classic “style-over-substance” designation. Conversely, examples are many of truly great playing that has no extra musical narrative to help push its reception towards broader recognition.

As music lovers, I am sure that we can all think of examples that reside in either of these two categories. Rarely, do both imperatives come together. But, thankfully such is the case on Ruth Slenczynska’s My Life In Music, new from Decca Records. The music: Samuel Barber, Debussy, Grieg, Bach and, of course, Chopin (Slenczynska had earned a reputation as among the most celebrated of Chopin interpreters while still a child prodigy) is, given the considerable time spent working on this repertoire, predictably amazingly played, recorded, interpreted and executed. But it is the extra musical bits, most notably the fact that this 2022 album was recorded when Slenczynska was 97-years old, representing a return to the Decca label after an absence of nearly 60 years, that makes this recording both a satisfying musical statement and a punctuation note on a fascinating life in music that I knew little about prior to the record’s release, the ensuing press and the considerable interest in this remarkable story. 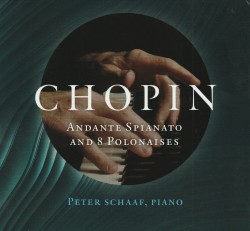 Let me introduce you to an exceptionally talented artist, Peter Schaaf. Not only he is having a brilliant career as a concert pianist and accompanist but he is also a remarkable portrait photographer with such clients as Seiji Ozawa, André Laplante, Janina Fialkowska and Peter Schickele.

Due to the COVID epidemic his photographic career came to a halt, so for the past two years he has focused on the piano, practising more than ever, learning new pieces and expanding his repertoire. During this time he created and issued four CD recordings: 1) Chopin Polonaises, 2) Chopin Waltzes 3) Albeniz Iberia and 4) a miscellaneous waltz album from a few different composers like Schubert, Brahms, Ravel and Dvořák. And imagine, the four albums are available on his website for free download! I wouldn’t mind having any of them in my collection.

The Polonaise is a genuinely Polish, elegant dance especially suited to festive occasions. The couples line up one behind the other and move forward gracefully in a unique 3/4 time rhythm. It’s beautiful to watch and is sometimes even included in symphonies, concertos and operas. Chopin wrote eight of them (and my fondest wish was to be able to play the “Heroic” A flat Major Op.53, which I fell in love with). Schaaf plays it with joy and panache and the middle ostinato is particularly menacing. The Andante Spianato is flowing gracefully in sustained piano and the following Grand Polonaise erupts in fortissimo as a magnificent contrast. This is highly accomplished, technically brilliant, enthusiastic piano playing and a recording to match. 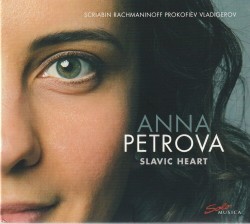 Classical music is rarely political anymore, although extra-musical narratives can be unpacked from much of Western Art Music and be applied both for the purposes of historical contextualizing and in an effort to make sense of today’s world. And while making sense of today’s world may seem like a yeoman’s task as of late, classical music listeners should not avoid listening to and reflecting on the music of the many great Russian composers of yesteryear whose gifts to the world were many indeed.

It would be a shame to make the legacy of such 20th century Russian composers as Sergei Rachmaninoff, Sergei Prokofiev and Alexander Scriabin yet another casualty in the ongoing and horrific war in Ukraine. Recorded prior to the Russian invasion of February 2022, Hungarian pianist Anna Petrova, a highly feted pianist and Doctor of Musical Arts who is on faculty at the University of Louisville, takes on the challenge of interpreting this fine music with aplomb on her Solo Musica release, Slavic Heart.

Capturing the music of the three aforementioned composers, along with the work of Bulgarian Pancho Vladigerov, this excellent new recording mines what must have been a creatively fertile geographic area and 50-year time period (1892 to 1942) to bring these haunting melodies back into focus. I can only imagine that solo pianists love (and perhaps dread?) the inherent challenges that the canon of these four composers presents. But with marvellous technique, a deft touch on the piano and an ability to coax new insights from these canonic pieces, Petrova makes it clear on Slavic Heart that she is up to the task.

Listen to 'Slavic Heart' Now in the Listening Room 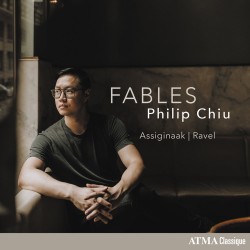 Indigenous issues are an important topic in Canada today and Canadian pianist Philip Chiu addresses their significance on this ATMA recording by pairing music by Maurice Ravel with that of Anishinaabekwe composer Barbara Assiginaak. Inaugural winner of the Mécénat Musica Prix Goyer, Chiu has made a name for himself as both soloist and chamber musician. His musical partners have included Emmanuel Pahud and Raphael Wallfisch.

The disc opens with the Ravel String Quartet in F, composed in 1903. A truly beautiful work, the quartet is considered by many to be among the finest in the repertoire and this transcription by Lucien Gurban (and further adapted by Chiu) is exemplary. Indeed, the listener could easily be deceived into thinking it was originally scored for solo piano. Throughout, Chiu does it full justice, his approach as poised and elegant as the music itself. The frenetic finale is a true tour de force, with the young artist demonstrating a formidable technique.

Assiginaak’s piece Mnidoonskaa (A Multitude of Insects), composed in 2021, is a perfect companion. Inspired by Indigenous teachings, the work – the first of two collections of short pieces – is in five movements and pays homage to those tiny creatures that are often unseen or simply ignored. Movements such as Water Striders and Mosquito Larvae are highly atmospheric – true examples of 21st-century impressionism – while the brief third movement One Certain Mosquito Sings, is hauntingly lyrical.

These are fine fables indeed – engaging repertoire beautifully performed – how could we ask for more?

Listen to 'Fables' Now in the Listening Room 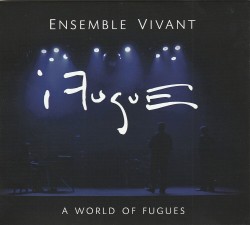 A homage to J.S. Bach and an imaginative exploration of fugues from around the world and across the centuries, this album is beaming with creative sonic adventures. Hop on board and you will hear music that is entertaining, stylish and absolutely daring in both programming and performances. Included here are arrangements of various fugues by Bach as well as Piazzolla, Romero, Vivaldi, Shostakovich, Franck and Villa-Lobos. Ensemble Vivant also presents three world premieres on this album, expressive contemporary fugues by Canadian composers John Burke and Michael Coghlan.

Ensemble Vivant brings out the beauty and the precision of the form in fugues with strictly classical foundation. The arrangements include a varying number of instruments and some work better than others, but the performances are always synergetic and engaging. Burke’s innovative arrangement of Vivaldi’s Sinfonia in E Minor featuring percussion (and the clever title iFugue) works exceptionally well and Catherine Wilson’s charming rendition of Bach’s Prelude & Fugue in F-sharp Major captures the essence of Bach in small gestures. But it is the fugues in the South American tradition that light the fire in the ensemble and bring the never-ending cascades of passion and movement. Fuga con Pajarillo, written by Venezuelan composer Aldemaro Romero and arranged by Julien Labro, is simply stunning. A World of Fugues offers a journey around the world in 15 pieces, each with a message and a beauty of its own. 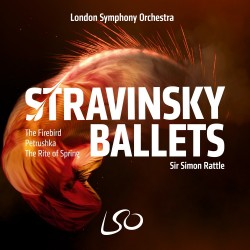 Stravinsky told stories; his ballets are like film scores accompanying every moment of the action. Here are his three early masterpieces, musical Art Nouveau, produced with tremendous care and skill by the London Symphony Orchestra, led by Sir Simon Rattle. It’s impossible to overstate the quality of playing here, at the individual and ensemble level.

I love how confidently they produce the now-familiar Firebird, yet the music still sounds new, and utterly Russian (notwithstanding the debt owed Ravel, in terms of the rich orchestration and harmonic colour). Sharp details emerge from the misterioso bass murmur of the introduction. The orchestra provides lush romantic gestures, but gives nothing away in rhythmic acuity. The Princess’ Game, the Firebird Variation and most of all the Infernal Dance will get you up and dancing. The detail is phenomenal! So much of what Stravinsky created has since been borrowed repeatedly, especially by film composers. It’s a marvel to hear the evergreen source material.

In Petrouchka, Stravinsky juxtaposes concurrent “unrelated” musical events. Who came first, Ives or Igor? Muscular assurance and finesse feature throughout this performance. Can a difficult score sound too easy? Not to me, it simply sounds daring, and correct. The desolation in Petrouchka’s Cell stands in gloomy contrast to the vivid account of the Shrovetide Fair. The exuberant Rattle’s enthusiasm is infectious; all the players buy in.

Finally, the terror-filled depiction of pagan ritual sacrifice that shocks and awes the listener to this day: Le Sacre du Printemps, possibly Stravinsky’s most celebrated work. Its premiere famously provoked a riot among the audience. According to the composer’s own account, things were also fairly riotous backstage: he described Valery Nijinsky (great dancer, not-so-much choreographer), yelling step counts to the dancers from the wings, resulting in onstage chaos. The performance here is anything but chaotic, except possibly by intention. Menacing, bracing, unsettling, completely as intended. You don’t have to love this music (though I do!) to admire this performance. Nothing, not even the perfect assurance of the LSO and Rattle, diminishes its edginess. 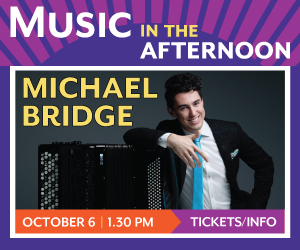