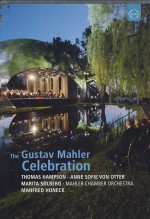 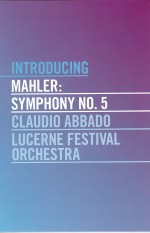 There’s not a lot to see in Kaliště, the tiny enclave of some 330 souls in the present-day Czech Republic, but on July 1 this past summer the town was inundated to celebrate the 150th birthday of their most famous son, Gustav Mahler. Set in a temporary outdoor structure, the greatly augmented Gustav Mahler Chamber Orchestra (originally founded by Claudio Abbado) appeared under the direction of Manfred Honeck for a festival performance of excerpts from Mahler’s towering Second Symphony and a handful of his more intimate songs with orchestra featuring baritone Thomas Hampson and soprano Anne Sofie von Otter. Despite the compromised acoustics of the band shell the sound of the performance is actually quite good; while von Otter is content with the conventional park-and-bark position to deliver her considerable vocal gifts, hammy Hampson relishes the opportunity afforded by his wireless headset microphone to roam the stage both back and front in a riveting performance of the great anti-war song Revelge. Though little of the town that Mahler knew remains, the camera glimpses a ghostly military band in the distance and briefly roams through the local Jewish cemetery. The Czech Boy’s Choir and Prague Philharmonic Choir chime in remotely from the local church in Es sungen drei Engel and appear on the bandstand to great effect for the concluding paean of the Symphony.

Introducing Mahler is an episode from a music documentary series on EuroArt, Introducing Masterpieces of Classical Music. It features a succinct explication of the Fifth Symphony by British musicologist Jeremy Barham, with piano excerpts leading into the corresponding orchestral segments augmented by appropriate visual footage, scrolling music examples, and additional commentary by anonymous voices reading from period documents. Unfortunately these secondary narrative sub-tracks are at times near-inaudible in the stereo mix. The real draw of this DVD is the magnificent performance of the symphony by Claudio Abbado and his hand-picked Lucerne Festival Orchestra, repackaged from an earlier incarnation of this 2004 once-in-a-lifetime concert. The expertly directed camera work brings an extra dimension to the intense concentration and amazing ensemble work of this distinguished ensemble responding as one with the greatest Mahler conductor of our time.