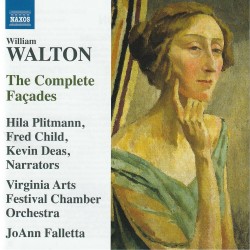 It’s difficult to forget a first love, whether another person, or in this case a recording of a modern curiosity. Façade, an Entertainment, is composed of poems by Edith Sitwell recited to (over? against?) popular song and dance stylings by an extremely young (18!) William Walton. Those originally entertained were doubtless the bloom of British intelligentsia, as white and privileged a crowd as ever was. Façade’s texts are sometimes problematic; they could never be written today, or hopefully, never published. There’s bushels of racism and sexism, which might have been palatable to an Edwardian audience. There’s also stark satire of the British upper crust, and some good old sexiness as well.

These are virtuosic mouthfuls of dance rhythms along with rapid patter through surprising and sometimes awkward syllables. On my old (sadly stolen) recording, Peter Pears shared recitation duties alongside Dame Edith herself; here Hila Plitmann outdoes Sitwell. I appreciate her various affected accents. She carries off the humour and snark of the poems while maintaining verbal balance. Kevin Deas brings a rich, deep baritone to his assignments, and a certain dignity to The Man from a Far Country (“Though I am black and not comely…”).

The most poignant and personal poem of the first suite is By the Lake. Sitwell’s own melancholic version sets a standard for heartfelt sorrow describing a past love affair; it sits apart from the more satiric aspects of the work. Although only responsible for the introductory and final stanzas, Fred Child’s sing-song mannerisms jar, as does his half-hearted wave at a brogue in the Scotch Rhapsody. A bland American accent and aimless melodification just don’t (pun alert) sit well with me. Score two for trained vocalists, zero for radio hosts.

Led by JoAnn Falletta. the performances among the band are admirable. Walton had a great sense of the dance hall, and the small ensemble evokes many other such groupings of the era. Balances are handled well, and the pacing is pretty good too. Included are two addenda to the original suite, which was written in 1922, but not published until 1951.