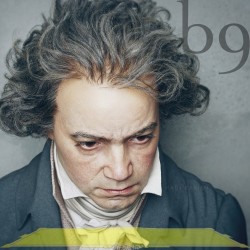 As is heard in all his creations, John Oswald’s musical vision is remarkably original. Here, in his latest Rascali Klepitoire release, Oswald’s knowledgeable artistic creativity conquers, quotes, mimics and refigures from all nine Beethoven symphonies into a 30-minute four-movement compilation with the intent to surprise. He guides and produces his self-described  “artificial-intelligence infused” synthetic orchestra,  including winds, strings, horns, percussion and vocals, using the NotePerformer engine, produced by Wallander Instruments of Stockholm. It “includes its own sounds encompassing a large-scale modern symphonic orchestra” based on “technologies bridging the gap between samples and synthesis.”

The opening vantage is tonal, technically detailed, with strict tempos and not much volume variation except for sudden loud crashing sections. In the shortest section bade, Oswald’s bits-and-pieces collection of loud percussion, slow sections and moving string lines is an interesting cross section of his and Beethoven’s writing. Love the contrasting instrumental lines in though. In venerable, Beethoven fans will love how Oswald juxtaposes familiar fragments to make a new sound, especially from Beethoven’s famous vocals.

Three bonus items are also included. A bootleg recording of a live b9 performance is a welcome addition with the to-be-expected real instrument subtleties also illuminating how well the synthetic orchestra version works. Concentrated following of the 44-page full musical score, prepared by John Abram, (not including an updated final page), aids listening to the whirlwind music. Oswald’s 2000-word interview discusses his creative process here.

Throughout, Oswald’s quotes and juxtapositions of his own and Beethoven’s music are incredibly smart and well produced, and they sound better and better with each repeated listening!