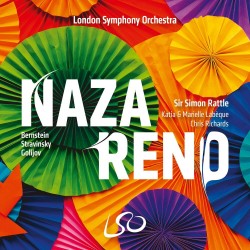 Sir Simon Rattle and the LSO have released, concurrent with their Stravinsky: Early Ballets collection, a record offering a brief survey of the Afro-Latin influence on “serious” music of the last century. It includes two curiosities for clarinet: Prelude, Fugue and Riffs (1949) by Leonard Bernstein, and Ebony Concerto (1945) by Stravinsky. Both were commissioned by Woody Herman, and each lasts under ten minutes. They remain somewhat overlooked, perhaps on account of their offhand treatment of the solo instrument, or the fact that they both feature big band, not full orchestra. The two works are given a lively ride by LSO lead clarinetist Chris Richards and the decidedly non-orchestral backup, mainly of brass and saxes.

Most of the disc is taken up by Nazareno (2009) a beautifully rendered adaptation (by Venezuelan composer Gonzalo Grau) of Osvaldo Golijov’s scintillating La Pasión según San Marcos (2000); this new rendering omits the vocals of the original cantata. Commissioned by Katia and Mireille Labèque, it’s scored for two pianos, Latin percussion section, plus winds and cello. Without text, I still hear how the music conveys the story of the Christian sacrifice. Powerful rhythmic dances abound, but behind the upbeat samba movements lies a much more sombre tone, especially in the slow ballad Sur. I won’t be surprised if a choreographer selects this score for a new dance work. It might serve as an answer to Stravinsky’s pagan vision of the sacrifice, made roughly a century ago.

The LSO, or the sections performing on this disc, give the selections punch and vigour. The soloists and percussionists are stars.