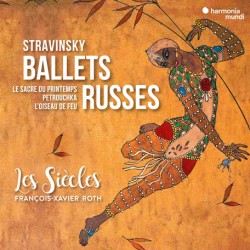 Perhaps you remember that Le Sacre du Printemps was used in the Disney film Fantasia and Stravinsky was invited to the studio for a private screening. He was offered a score as a courtesy but the maître politely declined, saying “I don’t need it; the score is in my head.” Oh, but it all changed, sir.... was the answer.(!)

Along with Le Sacre, the two other ballets were first presented in Paris between 1910 and 1913 as a celebration of Russian arts. A certain Russian impresario, Serge Diaghilev, was the mastermind and organizer, a “terrible, charming man who could make stones dance” as Debussy referred to him.

Paris at this time was a hothouse of invention in the arts and these ballets form a change, indeed a revolution, a turning point in the direction of music of the 20th century, Le Sacre especially. Inspired by rituals of pre-Christian, pagan Russia this is something the world had never heard before. It’s brutal, elementary, forceful, violent and upsetting.

The other two ballets are a bit more conventional but equally exciting and very colourful. The Firebird is based on a Russian fairy tale and Petrouchka conjures up a noisy village marketplace with a puppet theatre with three characters and a very sad story. A brilliant new recording.