Details
Written by Melissa Scott
Category: Early, Classical and Beyond
Published: 20 May 2022 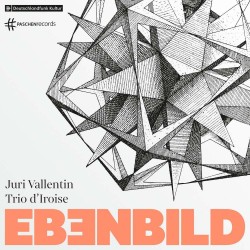 Only to be described as unique and colourfully unconventional, the newly released album Ebenbild, featuring oboist Juri Vallentin and the Trio d’Iroise, is a blend of recited song text, choruses by J.S. Bach, as well as five pieces from various eras and styles all married together with one common theme: J.S Bach’s O Haupt voll Blut und Wunden (O Sacred Head, Sore Wounded).

Originally derived from the madrigal Mein Gmüth ist mir verwirret (My mind’s confused within me) by Hans Leo Hassler (1564-1612), this theme was repeatedly used by Bach throughout his life in many works, including the St. Matthew Passion and the Christmas Oratorio. Arranged for oboe quartet, the album begins with the original madrigal and then is followed by the recited text of the first stanza, a chorus using the theme from one of Bach’s works and then the Sonata da camera in G minor O Haupt voll Blut und Wunden by Johann Gottlieb Janitsch. The album continues in this format with four other recited stanzas, four choruses and four works: Frederick Kelly’s Romance from the String Trio in B Minor, Charles Bochsa’s middle movements from two of his oboe quartets, Four Preludes to Infinity by Theo Verbey and the unfinished final fugue written by J.S. Bach shortly before his death.

The performances by Vallentin and Trio d’Iroise are virtuosic and thoughtful, showing a range of musical knowledge and sensitivity. A polished gem, this album is truly a heightened experience.