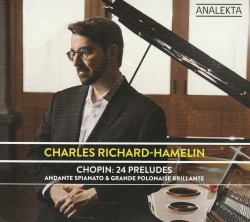 “All you have to do is write one true sentence. Write the truest sentence that you know.”
–Ernest Hemingway

Pianist Charles Richard-Hamelin is well on his way to becoming a Canadian national treasure. In fact, he likely already is. Though he also works with collaborators in recordings, the solo stage is where Richard-Hamelin’s talent originated and where it remains most impressive to date. (His performances of the Chopin ballad cycle are now in the annals of recent musical history – a show “to tell your friends about.”) The newest recording from Richard-Hamelin modestly juxtaposes Chopin’s Preludes, Op.28 with the Andante Spianato et Grande Polonaise Brillante, Op.22.

At once, the opening preludes of Op.28 deliver something unexpected. It’s what is not there that seems more notable than what is. Richard-Hamelin plays this music in an earnest and brave language that is difficult to comprehend at first. There is such a brazen lack of the self that the listener feels as if they are missing something. Too many pianists of our day move their egos to the fore in performance; not Richard-Hamelin. He glides through this miraculous set of miniatures with a devotional vision, as if the very composer himself were at the keyboard.

The Grande Polonaise is equally unexpected in its freshness and lucidity. Open and honest, this music lilts with a simplicity of means that awakens subtler forms of beauty. One trusts that this is just another iteration – among many – on a long road that Richard-Hamelin will tread. His life and career will bear witness to a multitude of beautiful things as he climbs towering mountains of musicianship, one true sentence at a time. As listeners, he does the work for us, conjuring and shepherding, as we are effortlessly carried to the summit view, ’pon wings of pianistic gold. 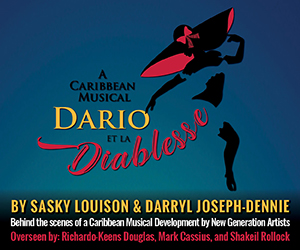