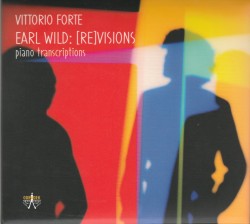 Proclaimed “a tribute to the great musician on the tenth anniversary of his death,” a disc from newbie Italian pianist, Vittorio Forte, celebrates an impressive assortment of transcriptions from the late great American keyboard virtuoso Earl Wild.

Opening with the oft-heard Harmonious Blacksmith Variations by Handel, Forte thrusts the listener into the heartiest of renditions with an unexpected quantity of octaves and thickly voiced figures. Wild’s take on the original Handel is, after all, a dated one but Forte seems to relish this peripheral brand of pianism. With such technical command as he possesses, we get caught up in Forte’s excitement, not to mention the sheer tunefulness of Handel’s music. By its conclusion, one laments the end: what if Wild had written a variation or two of his own?

The album’s centrepiece is a collection of transcriptions of songs by Rachmaninoff.  Wild earned a reputation for these gorgeous little things and Forte takes up the mantle with admirable aplomb. Naysayers might argue that pianists have enough original Rachmaninoff in the catalogue to satisfy and, consequently, dispraise the pillaging of song repertoire for the sake of yet more piano music. The rest of us are just grateful that Wild did what he did, creating felicitous versions of several Rachmaninoff songs. Indeed, the Russian master himself made arrangements of at least two of his own songs for solo piano, offering them as encores in recitals. And so Wild – and Forte – remain in safe (and inspired) company.