Details
Written by Janos Gardonyi
Category: Early, Classical and Beyond
Published: 07 May 2021 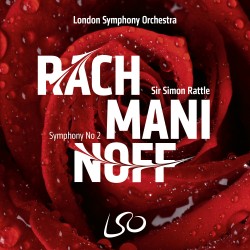 It’s just about time that we realize Sir Simon Rattle is one of the greatest conductors of our time. His bio is the ultimate success story. As a kid from Liverpool with minor conducting assignments in England, in 2002 at age 42, he was elected music director of the Berlin Philharmonic, the most prestigious and probably the best orchestra in the world. The youngest ever for this honour. He kept this post amazingly until 2018 when he “retired“ with the highest accolades, beloved by the orchestra and the City of Berlin, but his career was far from over. Soon thereafter, he went to Vienna and conducted a wonderful Ring Cycle at the Staatsoper, televised, so I was lucky to watch it. He had numerous recordings on the EMI label, but in 2017 he took over the London Symphony and began recording on the orchestra’s own label, LSO Live.

Rachmaninoff’s Second Symphony is the best of the three he wrote and has always been a favourite of mine. After the failure of his First it shows full maturity of his creative powers. It has a “sustained vitality, richness of lyrical invention and a glowing eloquence capable of rising to extraordinary power” (Robin Hull). Rattle conducts the entire uncut version from memory and it’s such a relaxed and spontaneous reading aided by the highest quality HD sound that so reverberated throughout the house that I was wholly enchanted.