Details
Written by Raul da Gama
Category: Early, Classical and Beyond
Published: 07 May 2021 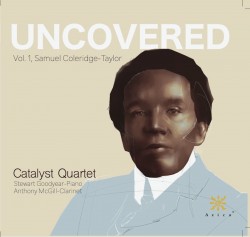 The late-19th-century British composer, Samuel Coleridge-Taylor, conquered the United States with his musical ingenuity. But could his being billed – somewhat patronizingly – as the “African Mahler” have blunted his singular musical achievements? We will never really know, and it may even be unimportant now as, with Uncovered, Vol. 1: Samuel Coleridge-Taylor, the Catalyst Quartet turns the marquee lights on to illuminate his elegant music, and not the colour of his skin.

But poetic justice must also come by way of inviting pianist Stewart Goodyear and clarinettist Anthony McGill – two prodigiously gifted Black musicians – to participate in this significant musical project. The association with Mahler does have some significance however, because it took decades of proselytizing by conductors such as Bruno Walter, Wilhelm Mengelberg and Leonard Bernstein before Mahler’s symphonies became audience-pullers. If it’s fallen upon the Catalyst to do likewise for Coleridge-Taylor they’ve certainly delivered.

These are über-articulate readings of the Quintet in G Minor for Piano and Strings Op.1 featuring Goodyear, Quintet in F-sharp Minor for Clarinet and Strings Op.10 featuring McGill and Fantasiestücke for String Quartet Op.5. The Quartet’s musicians shape phrases with attention paid to every nuance of the scores, while the music’s grand sweep remains paramount throughout; Goodyear’s pianism sings in the piano quintet and McGill’s clarinet does likewise in Op.10. The Catalyst’s performance is marked by a wide range of touch and timbre, with extraordinary emphasis on the inner voices of Coleridge-Taylor’s eloquent music.