Details
Written by Michael Schulman
Category: Early, Classical and Beyond
Published: 07 May 2021 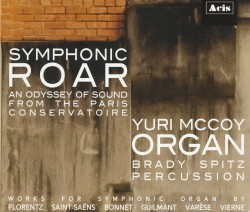 Inspired by French composers’ exploitation of the organ’s myriad multicoloured sonorities in these “symphonic” works, Houston-based Yuri McCoy says he feels “free to orchestrate… in many different ways,” often making “many more registration changes than indicated in the score.” (As for the “roar,” wait for it!)