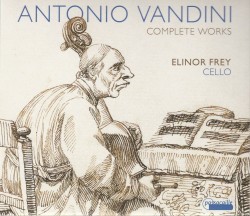 The prolific Canadian-American cellist Elinor Frey adds another impressive release to her discography. This new record features the complete works of the regrettably little-known Italian cellist and composer, Antonio Vandini. In mighty musical company with the likes of Tartini and Vivaldi, Vandini proved himself a virtuoso in his own right, touring Europe as a celebrated cellist; he also wrote music that has remained inexplicably neglected, even in the 21st century.

Six sonatas and one concerto adorn this attractive disc, exquisitely conceived, researched and recorded alongside Frey’s collaborators Patxi Montero, Marc Vanscheeuwijck and Frederica Bianchi. The collaborative voices of contrabass, viola da gamba and harpsichord complement these cello-centric works to salient effect. Vandini himself boasted top-drawer musical partners, the most famous of whom was Giuseppe Tartini. Vandini also taught at La Pietà in Venice, alongside Vivaldi. As mirror to the artistic comradery Vandini enjoyed in his own lifetime, Frey has assembled an expert group of musicians here – friends and colleagues – to help realize these colourful, inspired scores. Some highlights include: the duo Sonata in C Major, Van.2 and the sunny Concerto in D major, Van.5 which features the entire ensemble with two added violins and viola. The final work on the record, the Sonata in E Major, Van.7 has a particular depth of expression, exemplifying the verdant key of E Major. Frey’s flawless focus and confident musicality leads us through an 18th-century cave of wonders: a joyous, antique grotto where others fail to tread.