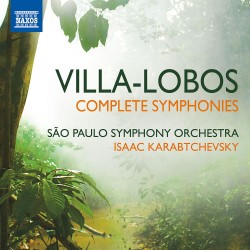 Among the amazingly prolific Heitor Villa-Lobos’ 2,000-plus works are 11 audacious, spellbinding yet little-known symphonies, composed at opposite ends of his career. Except for the epic Symphony No.10, they sort themselves into pairs, stylistically and by date of composition.

As a boy, Villa-Lobos learned to play clarinet and cello from his father. Adding guitar to his skills, he performed Brazilian popular and folkloric music with salon ensembles, and symphonic and operatic repertoire as an orchestral cellist. Slighting institutional composition study, Villa-Lobos absorbed Vincent d’Indy’s pedagogical Cours de Composition Musicale, leading to his trademark mix of European late-Romanticism with Brazilian melodic and rhythmic exoticism.

Villa-Lobos wouldn’t produce another symphony for 24 years, while composing many other orchestral, chamber and vocal works, eight of his nine Bachianas Brasileiras, all 17 Chôros and dozens of piano pieces, also serving as director of music education for Brazilian public schools.

The angular themes of Symphony No.6 “On the Outlines of the Mountains” (1944) were derived by tracing the contours of photographed mountaintops. The opening movements conjure foreboding, rugged, desolate vistas; the Allegretto and final Allegro bathe the vast panoramas in bright sunlight. The four movements of Symphony No.7 “Odyssey of Peace” (1945) closely mirror those of No.6, with similar tempo markings, timings and moods. Here, turbulence and slowly drifting tonal centres precede two buoyantly joyous movements, the closing seconds echoing the bombast of the “Victory” finale after World War I.

The unsubtitled Symphonies No. 8 (1950) and No.9 (1952) are Villa-Lobos’ most concise – No.9, just under 22 minutes, is the shortest of all. Both are infused with confident, upbeat melodies, mechanized urban rhythms and dense metallic textures, reflecting the revitalized post-war sense of optimism and material progress.

Further enriching this six-CD treasure-trove are two folklore-inspired works depicting mythical jungle spirits: the tone-poem Uirapuru (1917) and the choral cantata Mandu-Çarará (1940), sung in indigenous language Nheengatu. (Texts and translations for this and “Ameríndia” are provided.)

With definitive, super-charged performances by the São Paulo Symphony Orchestra conducted by Brazilian-born Isaac Kabatchevsky, this set is most enthusiastically recommended!