Schubert: The Power of Fate 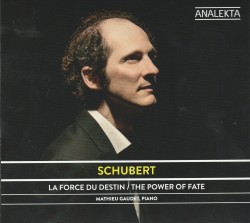 What simple, unexpected gifts we receive from the hands of Mathieu Gaudet. In May of 2020, this writer reviewed Gaudet’s disc, Late Inspirations, the second installment in a broad Schubert project from Analekta. Then in June, Gaudet went back into the studio to record two sonatas by his indelible muse, his wonderful counsellor, Franz Schubert. Dubbed “a lifelong vocation for Gaudet,” the music of Schubert yet radiates evergreen melody and benevolent light on this third record in the cycle. Themed The Power of Fate, Gaudet’s newest release features the little-known Sonata No.7 in E-flat Major, D568 and the seminal and nearly balladic Sonata No.25 in A Minor, D845.

Right from the first, open-hearted phrase of the E-flat Major, Gaudet warmly arrays us in a universe rich and rare. Herein, Schubertian laws of musical physics reign supreme and such unlikely sonatas as this are realized, beguilingly, with warty oddities explained and youthful charms celebrated. How marvellous that, even today, corners of the keyboard repertoire remain unfamiliar. Gratefully, Gaudet unearths gem upon gentle gem for our benefit.

The second work on the record opens a portal onto a shrouded musical garden, darkly glistening from a different sphere. The characterization of every last note is vividly, patiently considered by Gaudet as he soars yet loftier heights with the making of each new Schubert disc. I am reminded of Leon Fleisher – an important mentor of Gaudet’s – who once described this sonata’s second movement as “the fluttering of a songbird’s wings in flight.”