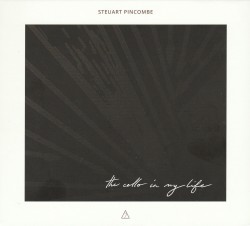 Cellist Steuart Pincombe’s choice of repertoire on this album is both diverse and connected. With exquisite musicianship, and skillful dedication to the delivery, he takes a deeper delve into the material of each composer and finds a way to link them together, in spite of the nearly 200 years separating them. He has highlighted the “gesture” – the energy and physical motive which begins a sound – and he does it with an attention to detail and authenticity which I found totally absorbing. The nuances of grit, breath and space spanned the entire album, beginning with the Bach Suite V in C Minor which flowed with a high volume of intent. The recording is edgy and perfectly flawed with a realness that included delightful burbles from the scordiatura.

Pincombe’s interpretations of both the early music and the modern instructions stay clear of both exaggeration and nerdiness. Rather, his energy is felt from a bodily sense deep within and is executed perfectly while still enunciating his passion for the freely gestural energy he programmed. Perhaps during this time of lost public performances I was especially appreciative of the rawness, the energy and the unprocessed feel of the recordings.

Helmut Lachenmann’s piece Pression, written in 1969, is a long exploration of playing parts of the cello not generally found on an album containing an entire Bach suite, and is simultaneously deeply serious and lighthearted, both darkly gritty and otherworldly shimmering. Pincombe dives deep and invests his whole being in this piece, exploring the depths of the complex instructional score and arriving with a presence also to be credited to the masterful miking of the performance, no doubt a complicated process. Here, he pushes his cello to the wall, and we are the grateful recipients of his dedication. The whole album is sensuous from start to finish but this performance stole my heart.