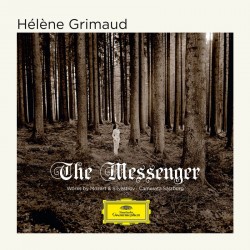 Hélène Grimaud opened her recital at Koerner Hall on March 8 with a Bagatelle by Ukrainian composer Valentin Silvestrov. It began so quietly that it took a few moments to realize Grimaud had started playing. On this new recording she plays five equally understated works by Silvestrov, patiently uncovering the layers of mystery which envelop these enchanting works. Yet even in the most restrained passages, she is so deeply expressive that these wistful, melancholy works resonate with life.

Silvestrov wrote two versions of one of his most celebrated works, The Messenger for solo piano and for piano with chamber orchestra. It’s a treat to have both versions together here. Since The Messenger is infused with the spirit of Mozart, placing these two very different composers side by side – though hardly a reach – proves rich in possibilities.

But, surprisingly, the Mozart works that Grimaud has selected, two Fantasias and the Concerto in D Minor, represent the composer at his most theatrical. In the Mozart (where she uses the cadenzas by Beethoven, since Mozart didn’t leave any), Grimaud is at her most exciting – dramatic, sensuous and virtuosic.

In both Mozart and Silvestrov, the fluent Camerata Salzburg captures the most nuanced phrases with sensitive, buoyant support.

Grimaud’s recital turned out to be the last live concert I heard before the lockdown. On this disc she dazzles once again, uncovering direct connections between Mozart at his most profound and the otherworldly music of Silvestrov, written more than 200 years later.