The English label Biddulph Recordings (altocd.com/biddulphrecords) was founded in 1989 by the violin dealer Peter Biddulph and the violinist and writer Eric Wen, the former editor of The Musical Times and The Strad. It specializes in new and historic recordings, especially of string instruments, and three recent issues are welcome reminders of three great 20th-century violin talents. 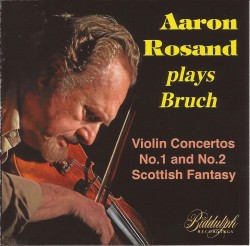 Aaron Rosand plays Bruch (LAB 1024 ) features the most recent recordings: the Violin Concerto No.1 in G Minor Op.26 and the Scottish Fantasy Op.46 in 2000 recordings with the NDR Radio-Philharmonie Hannover under Christoph Wyneken and the Violin Concerto No.2 in D Minor Op.44 in a 1970 performance with the Symphonieorchester des Bayerischen Rundfunks under Peter Richter Rangenier. They were originally licensed to Vox on two discs by the Rosand estate but since Vox was acquired by Naxos they were recompiled and licensed to Biddulph for their 10CD box set Ten More Great Violinists of the Century (LAB 8102) and for individual release.

Rosand, who died in 2019 at the age of 92, enjoyed an astonishing 77-year performing career. He had a simply lovely tone, with a fairly constant but always tasteful vibrato, and was particularly noted for his performances of the Romantic repertoire, a view clearly supported by his playing here. There’s no hint of any decline in technique in the 30-year gap between recordings, which feature first-class orchestral support in really lovely performances. 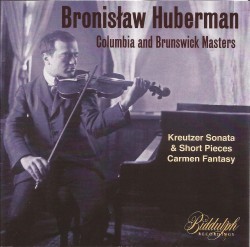 The other two CDs also resulted from the creation of masters for the LAB 8102 set. Bronisław Huberman Columbia and Brunswick Masters (LAB 1025) comprises tracks from two previous issues plus new material featuring the Polish virtuoso who died aged 64 in 1947. There’s nowhere near the amount of portamento that you might expect from someone who was performing in the 1890s, but there is real individuality in his phrasing and style.

Recording years aren’t given, but the only Brunswick master is an American acoustic recording, with piano, of Sarasate’s Carmen Fantasy on Bizet’s music; the remaining works – a fiery Kreutzer Sonata and ten short pieces by Bach, Schubert, Brahms, Tchaikovsky, Bruch, Elgar, Sarasate and Zarzycki – are apparently electrical Columbia performances with piano, although Ignacy Friedman in the Beethoven sonata is the only pianist identified.

Huberman’s mellow tone, described in the booklet notes as far darker in the Columbia recordings than on the Brunswicks, is quite distinctive, and his technical command outstanding, especially the double stops in Sarasate’s Romanza Andaluza and the dazzling playing in Brahms’ Hungarian Dance No.1 in G Minor and Zarzycki’s brilliant Mazurka in G. 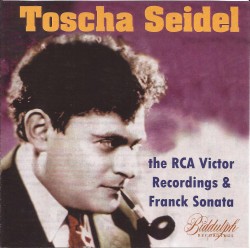 The real revelation in these three CDs, though, is Toscha Seidel the RCA Victor Recordings & Franck Sonata (LAB 138), a straight reissue after 20 years unavailability. The Russian Seidel, who died in California two days before his 63rd birthday in 1962, was in Leopold Auer’s legendary violin class in St. Petersburg with the young Jascha Heifetz. He made his American debut in April 1918, one year after Heifetz’s sensational debut there, and consequently always seemed to be in the latter’s shadow, moving to California in the 1930s and making a career in Hollywood and studio orchestras.

Seidel’s tone is very bright, clear and warm, his vibrato fairly fast and consistent, and his technique absolutely brilliant and effortless. Add his sweeping phrasing and captivating musicality (“Heifetz with heart” say my notes – guaranteed to start an argument somewhere) and you end up wondering why Seidel isn’t remembered as the violinist of the first half of the 20th century.

Six short pieces by Mozart, Wagner, Brahms (the Hungarian Dance No.1 in G Minor again in another terrific performance), Bakaleinikoff and Provost are from December 1938 and February 1941. Korngold’s previously unissued Much Ado About Nothing Suite from July 1941 sees Seidel joined by the composer at the piano in a memorable performance. Three songs from the movie, The Great Waltz, feature Seidel’s obbligato (well, in two of them at least) for soprano Miliza Korjus (“rhymes with gorgeous” – unfortunately, unlike her vocal talents on this showing), and a private studio recording from the early 1950s of the Franck Sonata in A Major, in which Seidel and pianist Harry Kaufmann seem completely unable to agree on tempo or rhythm in the first movement, complete a revelatory disc.

If you don’t know Seidel’s playing, you owe it to yourself to put that right. 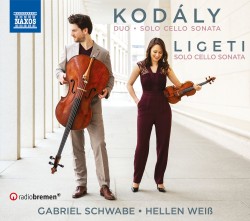 German cellist Gabriel Schwabe is in simply superb form on a new Naxos CD of solo sonatas by Zoltán Kodály and György Ligeti, with the equally fine violinist Hellen Weiß joining him in the Kodály Duo for Violin and Cello (8.574202 naxosdirect.com/search/747313420278).

Kodály’s Sonata for Solo Cello Op.8 dates from 1915, and has been recognised as the most significant work for solo cello since the Bach Suites. It’s a monumental work, given a thrilling performance here that explores every inch of its depth.

Ligeti’s Sonata for Solo Cello is a relatively brief piece of two short movements that were written in 1948 and 1953 respectively but not heard in public until 1979 thanks to the political restrictions of the Hungarian Composers’ Union. The first movement shows a folk music influence, with the second movement inspired by the Paganini solo violin Caprices.

Kodály’s Duo for Violin and Cello Op.7 from 1914 opens the disc. It’s a work that combines classical forms with the folk music in which Kodály was immersed at the time.

Weiß’ violin is a Matteo Goffriller from 1698, Schwabe’s cello a G. Guarneri, Cremona from 1695-97. The sound they produce is quite superb. 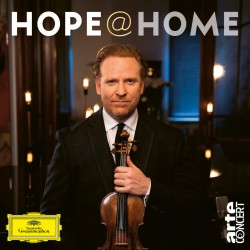 Restricted to his Berlin apartment by the cultural and social lockdowns earlier this year, violinist Daniel Hope wondered if he could find a way to perform from home but with top-quality sound. With the support of the TV broadcaster ARTE he turned his living room into a high-tech television studio and scheduled a six-week series of online chamber concerts with specially invited guests.

The result was the Hope@Home livestream project, a series of recitals that was broadcast live on ARTE and on the Deutsche Grammophon YouTube channel, and from which the label has now released highlights as an album (483 9482 deutschegrammophon.com/en/catalogue). The pianist and composer Christoph Israel was involved from the start; he accompanies Hope on most of the tracks and also contributed several of the terrific arrangements.

Every track is a live, single-take performance, with no editing. What strikes you first is the stunning sound quality. What strikes you second is Hope’s sumptuous playing – I’ve never heard him sound better. The 21 tracks include classical favourites like Schubert’s An die Musik, Fauré’s Après un rêve and Rachmaninoff’s Vocalise and popular standards like Moon River, Summertime, Autumn Leaves, La vie en rose and Over the Rainbow.

It’s an absolute joy from start to finish. 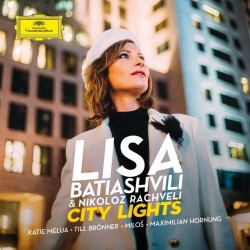 You may well have heard the opening track of City Lights, violinist Lisa Batiashvili’s new CD with conductor/pianist Nikoloz Rachveli on the classical radio channels, City memories – Chaplin offering sumptuous arrangements of two themes from Chaplin’s Limelight together with two from Modern Times, plus José Padilla Sánchez’s simply gorgeous La Violetera from City Lights. Batiashvili’s ravishing tone makes a captivating start to the disc, followed by a series of 11 special arrangements that offer multi-layered musical portraits of cities that are important to Batiashvili (Deutsche Grammophon 00289 483 8586 deutschegrammophon.com/en/catalogue).

Batiashvili says that “for more than two years we put all our energy, love and dedication into this project. It became my most personal journey.” Her commitment and involvement shine through on every track. 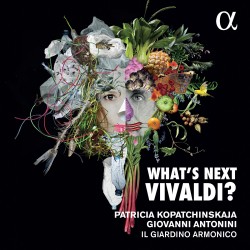 You can always count on violinist Patricia Kopatchinskaja to come up with something different and interesting, and so it proves with her latest release What’s Next Vivaldi? with Il Giardino Armonico under Giovanni Antonini (ALPHA624 naxosdirect.com/search/alpha624). The CD interweaves ultra-virtuosic concertos by Vivaldi with short pieces by current composers mostly commissioned specifically for this program.

Kopatchinskaja describes this recording as inviting Vivaldi into a time laboratory and engaging him in a dialogue with today’s creative voices from Italy, the five younger Italian composers having been asked to react to Vivaldi’s music in miniatures. The short contemporary works are by Aureliano Cattaneo, Luca Francesconi, Simone Movio, Marco Stroppa and Giovanni Sollima. It’s an intriguing disc full of top-drawer playing. 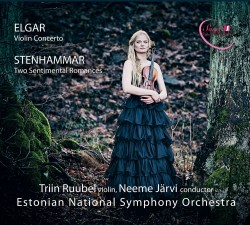 There’s a rather unsettling sound to the Elgar at times, with the orchestra tending to sound a bit too distant and with the soloist sometimes seeming to be buried in the general orchestral texture. Still, Ruubel is clearly a fine player and Järvi a hugely experienced and highly respected conductor, and there are many really lovely and finely crafted moments in an excellent performance of a notoriously long and difficult work.

Stenhammar’s Two Sentimental Romances Op.28 – No.1 in A Major and No.2 in F Minor – are attractive and absolutely delightful pieces, with Ruubel clearly in her element with the Romantic nature of the music. It’s really lovely playing. 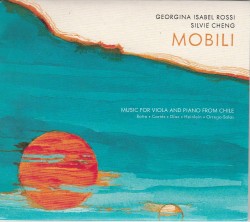 Violist Georgina Isabel Rossi, who was born and raised in Chile, and pianist Silvie Cheng are the duo on MOBILI: Music for Viola and Piano from Chile, a CD featuring world-premiere recordings of works by the Chilean composers Rafael Diaz, Carlos Botto, Federico Heinlein and David Cortés (New Focus Recordings FCR268 newfocusrecordings.com/catalogue). The only work previously recorded is the four-movement title track, Mobili Op.63 by Juan Orrego-Salas, who passed away at 100 just a few weeks before the CD was recorded, and to whose memory the album is dedicated.

The Diaz works are Will There Be Someone Whose Hands Can Sustain This Falling for amplified viola, and In the Depths of My Distance Your House Emerges for viola and piano. Botto’s Fantasia Op.15 from 1962 and Heinlein’s Duo “Do not go gentle” from 1985 are followed by Cortés’ Tololo, written in 2011 for viola and string orchestra and heard here in an arrangement for viola and piano by Miguel Farras. Carlos Guastavino’s really lovely El Sampedrino from 1968 is an extra track, not included in the booklet notes.

Fine playing of introspective and quite atmospheric music that really exploits the viola’s sonority to the full, results in an excellent CD.

Listen to 'MOBILI: Music for Viola and Piano from Chile' Now in the Listening Room