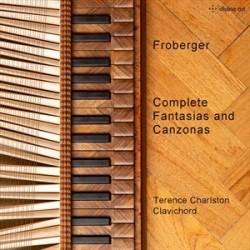 So rarely does it happen that performer, composer, instrument and instrument maker(!) equitably join in artistic synthesis. This new record, featuring period instrument specialist Terence Charlston, is a fine specimen of expertise and craftsmanship, with each of the above components keenly harmonized.

Today, there remain aspects of Johann Jacob Froberger’s art that are unknown to the public at large. The Middle Baroque composer’s contrapuntal works, in particular, are relegated to small circles of listeners and scholars – neglected, despite their ingenuity. Charlston understands this all too well. He looks not only to the impressive compendium, the Libro Secondo (an autograph manuscript dating from 1649), but to a fitting choice of instrument: a copy of a South German clavichord, the MIM 2160, as reconstructed by contemporary keyboard maker, Andreas Hermert.

Charlston has chosen this instrument for its timbral possibilities and expressive range, even citing a lute-like tonal profile. Infamous for pianissimo playing, the clavichord in general has long been commended for its intimate, (even private) character, lyrical and sensitive in its response to the player’s touch. Bemusingly, it even boasts vibrato, of a kind.

But not a single note of this disc ever sounds too private or too furtive. In the hands of Charlston, his clavichord soars and expands before our very ears. Through this incantation of counterpoint, in turns both exotic and familiar, Charlston reveals a depth of humanity on par with the great polyphonic achievements of J.S. Bach.