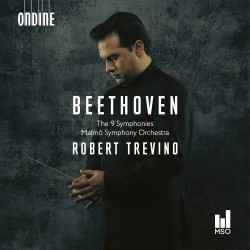 Young conductors must look forward to recording their first Beethoven cycle the way adolescents wait for their chance to get the keys to the car. Not every car is as finely tuned as the Malmö Symphony Orchestra, and not every kid knows how to drive as well as Robert Trevino. Still, the task must cut any ego down to size, so overdone is this amazing artifact of orchestral repertoire. What hasn’t been done with it? From the turbulence of Toscannini’s NBC recordings, at breakneck pace, to the several versions from Berlin with von Karajan, Chicago with Solti, and on and on…

And how to summarize what Trevino has achieved? First and foremost, his reading is lyrical. Beethoven can seem all elbows and knees, his angles and bangings claiming too much attention of those who only see the storm clouds gathering on the brow of his famous portrait. Trevino claims a different outlook on the famously tortured genius’ musical expression. After the jarring sequence of dominant seventh chords that opens Symphony No.1, the violins are encouraged to fill their instruments with romantic lush sound, and they manage the effect without excessive vibrato. In the iconic Fifth, whenever it stops knocking fatefully at the door, the same quality enters, especially in the first movement’s second subject.

Any symphony cycle will chart LvB’s progress from his early punk-Haydn phase, through the tormented Heiligenstadt period of encroaching silence to his late mystically elevated, even serene mastery. His greatest two symphonies mark the divisions between those three periods: the Seventh, which precedes his late period; and the greatest of them all, his Third Symphony, subtitled Eroica, the one famously dedicated and then undedicated to Napoleon. Consider the slow movements of each. In the earlier one, the mood is extreme tragedy, which Trevino milks by taking a tempo more than ten points below the indicated 80 bpm. The only way it can work is by complete dedication to the line. He allows the pace to move forward in the fuguetto, where the composer seems to cry for mercy or justice or just relief, and then lets it positively take off in the codetta that precedes the return of the opening material, yet he never returns to that opening dirge-like pace. This is pretty radical, to my ear, and I love it. In the more recognizable marche funèbre from the Seventh, as much as Trevino allowed flexibility in the example above, here he maintains an assiduous observance of a uniform but never mechanical pace. This earns him a standing ovation from this quarter. I cannot abide this piece given the inadvertent gradual accelerando one sometimes hears; it makes me want to drive off a cliff. Both movements perch on the precipice of despair, but the later one seems less angry, more resigned, and Trevino observes this difference, it seems to me.

A story Trevino tells in the notes about having attempted a strange move in a Schumann symphony with Leipzig’s Gewandhaus orchestra (the organization that premiered Schumann’s works) has him finally agreeing to try it their way, and thanking them subsequently for “making [him] a better conductor.” Malmö has perhaps significantly younger and, it might be, more flexible personnel. The ignition at the heart of this high-performance vehicle is undoubtedly a spectacularly well-regulated wind section: pitch-perfect solos and ensemble work enhance the lyrical element. Trevino loves the middle voices, and makes sure we hear them. He gives the strings license when supplying repeated rhythmic fill to celebrate the meeting of gut and horsehair. And he helps the players achieve the most startling crescendi. It’s lovely to hear Beethoven that isn’t all bumps and bruises, although the brass and (classical) timpani provide just enough of those. The low strings in the recitativo of the finale of the towering Ninth Symphony serve notice, if any were needed, that the entire band, from trunk to transmission, are an ensemble worthy of the ace driver on the podium.