Details
Written by Andrew Timar
Category: Early, Classical and Beyond
Published: 05 May 2020 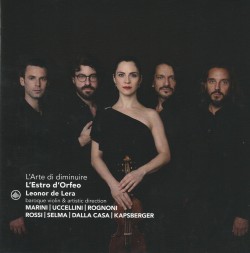 The outstanding L’Estro d’Orfeo quintet was founded by violinist and artistic director Leonor de Lera in 2015 to perform a “historically-informed approach in line with the aesthetics of the time,” on period instruments. Her mission was to champion the advanced instrumental virtuosity which developed in Europe during the late Renaissance to early Baroque eras.

L’Arte di diminuire is dedicated to musical diminution, the interpretative art of extemporary melodic variation and embellishment, an essential improvisatory aspect of musical performance practice of that time. Simply put, in this practice musicians melodically and rhythmically subdivided a received series of long notes into shorter values. In that period and region, a written composition was routinely regarded as raw material requiring musicians to embellish the score during its performance via diminutions. Such performances gave considerable scope for virtuosic display and interpretive exploration. This album explores that practice applied to 15 period motets, popular melodies and dance forms. The ensemble has chosen scores by early Baroque composers and interpreted them by applying advanced diminution procedures, in the process highlighting the individual contributions of L’Estro d’Orfeo’s 21st-century musicians.

Outstanding tracks include the madrigal Io canterei d’amor… reinterpreted via diminution by the ensemble’s viola da gamba and viola bastarda virtuoso Rodney Prada. De Lera’s four contributions are exemplars of this ensemble’s musically exciting approach to this interpretative inter-century practice. The most impressive part of the listening experience might be the freewheeling-sounding – yet always tasteful – instrumental virtuosity on display here. Prada’s mindboggling viola bastarda performances, leaping from treble to tenor to bass ranges and back with abandon, are alone worth the price of admission.